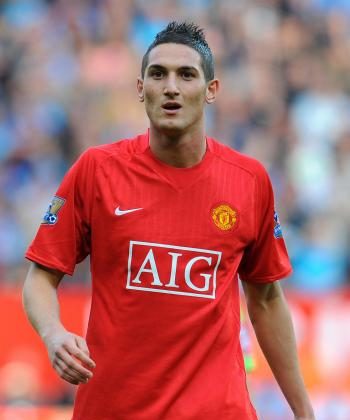 By Patrick Hayden
Print
Federico Macheda scored a late winner for Manchester United in a 3–2 win over Aston Villa and return to top spot in the English Premier League on Sunday.

Aston Villa started brightly as Gabriel Agbonlahor had his header cleared off the line but it was United who took the lead with Cristiano Ronaldo and one of his trademark free-kicks.

Soon later Gareth Barry ran down the right wing and crossed for John Carew who clinically dispatched into the bottom corner of the goal. Villa was even 1–1.

Villa took the game to United who had nine first team players out and dominated the play in many areas with Gareth Barry and Ashley Young exposing the second choice United defense.

Villa took the lead when Carew set up Agbonlahor with a floating cross, which van der Sar came for and missed. Agbonlahor’s header looped over the United keeper and into the back of the net.

United came back with a sweeping attacking move, which set up Ronaldo on the edge of the box to sneak in a roller past American goalie Brad Friedel.

But it was the 17-year-old Italian Federico Macheda who stole the show on his debut in the dying moments. With a sharp one-touch turn and an exquisite curling shot that stretched around Friedel, he left Old Trafford roaring.

United hosts FC Porto on Tuesday in the first leg of their Champions League quarterfinal. Rio Ferdinand and Dimitar Berbatov look set to miss the match but Wayne Rooney, Paul Scholes, and Nemanja Vidic will return. United will try to avenge their loss to Porto five years ago. Porto beat United on their way to European glory in 2004.

Liverpool moved top of the English Premiership briefly on Saturday when super-substitute Yossi Benayoun scored an injury time winner to steal a valuable three points away from home and keep up the pressure on Manchester United.

Liverpool did have its chances as Andrea Dossena hit the woodwork twice, each time with a header. Xabi Alonso was denied by the goal frame off a long volleyed drive and Fernando Torres’s bounced one against the post.

As usual the interplay between Torres and Steve Gerrard was good and the break through looked like it would come from one of the two.

Fulham looked a shade of the side that recently beat Manchester United 2–0 with Andy Johnson and Bobby Zamora seeming disconnected from the rest of their team.

Ryan Babel came on mid-way through the second half to rejuvenate Liverpool’s attacks and then with 15 minutes to go, Benayoun came on for Dirk Kuyt.

The Israeli Benayoun snatched the winner in the 92nd minute blasting home the ball from a tight angle.

“We know we are still in the title race. I think it puts a bit more pressure on Manchester United,” Liverpool coach Rafa Benitez told the BBC.

“They have experience and quality but they will be under pressure.”

Benayoun told the BBC, “We were lucky in the end to create two or three more chances. I missed a better chance before I scored but I was lucky to get another one and I hit well and it went in.

“It is the sweetest moment to score a goal in the last minute. We are very happy to get the three points.”

Up next for the Reds are the Blues—Chelsea that is—in Wednesday’s Champions League match-up. The two teams are very familiar adversaries in Champions League, having met in each of the last four years.

Alan Shearer’s reign as the new Newcastle manager failed to start on a positive note as his team was beaten at home by Chelsea, leaving them three points from relegation safety.

The wave of optimism which preceded the appointment of Shearer was soon brought back down to earth with a Newcastle performance which emanated a lack of confidence.

The win for Chelsea secures their third position in the League.

Chelsea was keen to spoil the Northerners hopes and controlled the match for most part.

Newcastle managed to hold up until the break thanks to keeper Steve Harper’s reaction save to deny Salomon Kalou from taking the lead.

Frank Lampard eventually put the visitors ahead 10 minutes into the second half when Nicolas Anelka’s shot bounced back off the bar, Fabricio Coloccini failed to make the clearance, and Lampard headed the ball in.

The game was put beyond the home side nine minutes later when Florent Malouda fired a shot through Harper’s legs.

Emmanuel Adebayor score twice on his return from injury to give the Gunners the win against Manchester City.

Gelson Fernandes came close to an equalizer, hitting the post from close range but the Gunners could have had more when Kolo Toure and Andrei Arshavin were saved from close range.

Fabregas floated in a free-kick to find an unmarked Adebayor, who headed the ball into the back of the net in the eighth minute.

The second Arsenal goal was orchestrated by Fabregas floating another ball to the feet of Adebayor. The Togolese striker then rounded keeper Shay Given and scored.

Arsenal manager Arsene Wenger told the BBC, “Adebayor got on the end of both goals for us but overall it was a very good team performance.”

“I am delighted that we have come back strongly after the international break. We go from strength to strength from game to game, and that’s very good to see.

“We are motivated. The players are hungry and up for it, and we have quality in the team.”

Manchester City boss Mark Hughes told the BBC, “It is difficult to take any positives out of the game. We were well beaten.”

“We had things to contend with. We lost Wayne Bridge and Vincent Kompany and that affected our game plan.

“Really, we just didn’t have enough energy on the field. Our passing was also poor and we played into Arsenal’s hands in the end.”

Arsenal travels to Villarreal for Tuesday’s Champions League quarterfinal first leg against Spain’s fourth place team. Arsenal beat Villarreal three years ago in the semifinal. Robin van Persie and Eduardo will not be in action for Arsenal so the Fabregas/Adebayor combination will be critical.

Arsenal will also be facing two of its former players in Robert Pires and Pascal Cygan.