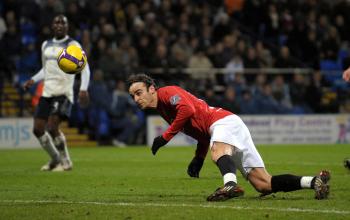 HEADING HOME: Manchester United’s Dimitar Berbatov sends his team to the top of the table with a last minute goal against Bolton Wanderers on Saturday. (Andrew Yates/AFP/Getty Images)
Soccer

Rahul Vaidyanath
Journalist
Rahul Vaidyanath is a journalist with The Epoch Times in Ottawa. His areas of expertise include the economy, financial markets, China, and national defence and security. He has worked for the Bank of Canada, Canada Mortgage and Housing Corp., and investment banks in Toronto, New York, and Los Angeles.
View profile
Follow
biggersmaller
Print
Dimitar Berbatov, back in the starting lineup for Manchester United, delivered the goods in a 1–0 victory over Middlesbrough on Monday.

Berbatov was quickest to react to a loose ball that Middlesbrough defender David Wheater failed to clear in the 69th minute.

The win moved the Red Devils to seven points back of Liverpool and four back of Chelsea with two games in hand. United is now unbeaten in its last seven Premier League matches.

“Three points is the name of the game,” said United manager Sir Alex Ferguson after the game. “We’re in a good position at the turn of the year. We look after ourselves and we’re ok.”

A last minute equalizer from Fulham’s American forward Clint Dempsey in a lively West London derby ensured the home team took a valuable point from one of the England’s top teams, Chelsea.

However Anelka got his chance on the half hour mark when Malouda limped off with an injury.

Dempsey put Fulham ahead in the first ten minutes capitalizing on a slight mix up in the Blues defense.

Chelsea midfielder Frank Lampard scored twice, the second on a free kick from 30 yards, to put the visitors ahead.

However in the last minute Simon Davies swung a cross in for Dempsey to head past Chelsea keeper Petr Cech.

“It was a fantastic fighting effort. Over 90 minutes Chelsea were the better footballing team, but we matched them in so many departments,” said Fulham manager Roy Hodgson.

Scolari told the BBC, “We had six, seven, eight chances to score and got two. They had two, from free kicks, and scored twice.

“We had more possession, but we made two dangerous mistakes in our box and because of that we’ve lost two points, it really was just incredible.”

In a scrappy encounter, former Arsenal captain William Gallas scored the only goal late in the second half.

Portsmouth came close in the first half when Peter Crouch hit the post with a header.

The breakthrough came when Gallas beat Portsmouth keeper David James to the ball and headed into the net.

“We were lacking a bit of zip because we gave a lot at Aston Villa in our last match [on Friday],” Arsenal manager Arsene Wenger told the BBC.

Portsmouth manager and former Arsenal captain Tony Adams told the BBC, “David James made a great save from a one-on-one, just before Arsenal’s goal, that kept us in the game.

“He is a magnificent goalkeeper and I don’t have a bad word to say about him.”

“I am very proud of my players—they worked their socks off. The players are certainly fighting for me, but we are just not getting the results.”

In other Sunday action, captain Steven Gerrard scored two goals in a lopsided 5–1 win for Liverpool. Newcastle provided very little resistance and things could’ve been much worse had their Irish keeper Shay Given not played so well.

In Tuesday’s action, Aston Villa travels to Hull City in an attempt to get back in front of Arsenal. Villa is currently tied with Arsenal on 35 points, 10 back of leaders Liverpool.