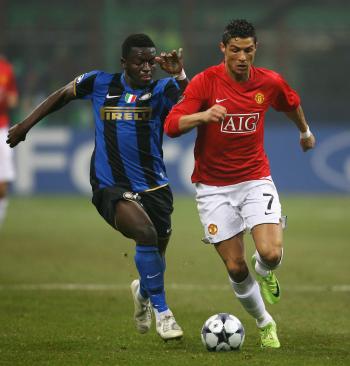 Manchester United thoroughly dominated Inter Milan in the first half of their Champions League match on Tuesday but was unable to bulge the back of the Italian net, resulting in an exciting scoreless draw.

The top team in Italy hosted the top team in England as rival managers Jose Mourinho of Inter and Sir Alex Ferguson of Manchester United locked horns for a 13th time. Mourinho notoriously holds the edge, having only lost to Ferguson once in 12 previous encounters.

"We had enough chances. Really we should’ve taken one of those chances," said Wayne Rooney in a post-match interview with Sky Sports.

"I thought we played quite well tonight."

The English, European, and world champions Manchester United started very brightly as Cristiano Ronaldo forced Inter keeper Julio Cesar into a big save off a free kick and then an incredible reaction save off a header from a corner kick.

Inter struggled to find any rhythm in the first half and United deserved at least one goal for their domination.

Inter was clearly unsettled as back-up goalkeeper Francesco Toldo got a yellow card for arguing with the referee from the sidelines after Sulley Muntari was kicked in the groin.

Ryan Giggs found himself one-on-one with Julio Cesar in the 26th minute but the Inter keeper closed down the angle and made a big save.

The match developed into a contest between Ronaldo and Julio Cesar as the Inter keeper one-upped everything the World Player of the Year could throw at him.

Cesar also had his goalposts helping him out as Ronaldo found out on a great free kick in the first half.

Inter made the second half a little more balanced after Mourinho’s halftime talk but no goals were scored.

Arsenal was the only team to record a win on Tuesday as Dutch striker Robin van Persie converted a penalty kick. The Gunners were in vintage form and were worth more than a one-goal victory. The important thing is they didn’t concede an away goal and will travel to Rome for the second leg on March 11.

In other Tuesday Champions League action, Thierry Henry scored with a low header to give Barcelona a 1–1 draw with perennial French champion Lyon. Juninho had given Lyon a one-goal lead with a trademark free kick. Atletico Madrid and Porto tied 2–2 in a game that will be remembered for Helton’s horrible goal-keeping mistake that gifted Atletico a 2–1 lead.