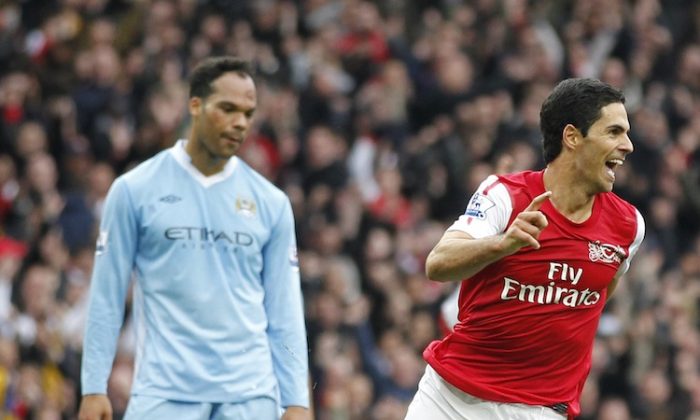 Manchester United recorded their eighth consecutive English Premier League victory, disposing of a luckless Queens Park Rangers 2–0 on Sunday. The win puts them eight points clear at the top of the table with cross-town rivals Manchester City going down 1–0 at Arsenal.

In the lunchtime game at Old Trafford, Wayne Rooney opened the scoring from the penalty spot after 15 minutes, and the job was completed by Paul Scholes with a vintage strike from outside the box at the 68-minute mark.

Sir Alex Ferguson’s team received a huge slice of good fortune with the penalty as referee’s assistant Kerry Richards failed to raise the flag against Ashley Young who was in an offside position as the ball was played through to him. In the event that Young was adjudged to be onside, the England winger certainly had a goal-scoring opportunity and was pulled back by the last Rangers defender, stand-in skipper Shaun Derry.

A penalty was awarded and, according to the current letter of the law, Derry had to be sent off. Many people regard this “double-whammy” as too great a punishment, which can literally decide the fate of a match at one stroke. And so it proved on this occasion.

United spurned a number of chances to extend their lead until 23 minutes into the second half when veteran Paul Scholes turned back the clock with a trademark pile-driver reminiscent of his golden years. Scholes deservedly received the Man-of-the-Match award. Persuading the midfielder out of retirement is now looking like an absolute masterstroke by Ferguson.

Interviewed after the game by Fox Sports, Rio Ferdinand was confident that United can retain their Premier League crown. “[We’ve] been in this position before. It counts for a lot. We know what it takes to get over the finishing line first.”

Prior to kickoff at the Emirates, Manchester City boss Roberto Mancini admitted in an interview with Fox Sports that, “We need to win or eight points is too much.” The manager made several changes to the side that stuttered to a draw against Sunderland, but kept faith with controversial fellow Italian Mario Balotelli.

Sergio Aguero returned to partner Balotelli up front after a two-game absence caused by an allergic reaction to medication. Playmaker David Silva was missing with a knee problem.

Gael Clichy and Samir Nasri were both selected to play against their former employer, so the Arsenal fans had plenty of opportunity to vent their wrath against the two “traitors.”

Arsene Wenger made one change to his line-up with Yossi Benayoun starting on the left.

The Gunners started the busier, but clear-cut chances were few and far between at either end. The best chance of the half came when Thomas Vermaelen just could not get out of the way of a Robin van Persie header, which deflected off him and onto the bar.

The other notable talking point of the first period was a horrendous, potential leg-breaking challenge by Balotelli on Alex Song that went unnoticed by the officials. The Italian was lucky to remain on the field.

Following a halftime reorganization, City began the second period with more purpose and showed flashes of their early season form for 10 or 15 minutes. However, it was not long before the home side reasserted its authority.

On 63 minutes, a typically brilliant ball over the top from Song yielded an opportunity for van Persie, but the star striker’s header glanced off the post. The Arsenal skipper did have the ball in the net seven minutes later only to be flagged for offside.

On 76 minutes, the woodwork came to City’s rescue for a third time, with Theo Walcott the unlucky player on this occasion. How both Vermaelen and Benayoun failed to net the rebound from point blank range only they know, but somehow City scrambled the ball clear.

Arsenal finally broke through in the 87th minute. With City starting to look weary, Mikel Arteta intercepted a loose pass about 10 yards outside the City area, took a couple of strides forward and unleashed a vicious drive that swerved out of Joe Hart’s reach and inside the post. It was a strike worthy of settling any game of football and no more than Arsenal deserved.

There was an unsavory postscript to proceedings with Balotelli being given his marching orders for yet another rash challenge. Bacary Sagna probably made the most of it, but the fact is that Balotelli deserved to go, given his conduct over the course of the game.

This was his fourth red card of the campaign and he is now likely to receive a five-game ban with City only having six matches left.

This was an excellent afternoon’s work for the Gunners who are now in sole possession of third place in the table, something that looked highly unlikely during the first few months of the season.

Whether or not Manchester City can turn things around and resurrect their season is open to question. It is the old story that a collection of expensive stars do not necessarily make a team.

As the match drew to a close this afternoon they looked like a collection of dejected individuals rather than a team with any sort of spirit. Mancini is certainly going to have to pull an Easter rabbit out of the hat to turn this situation around, but of course in football you never know what can happen.

Manchester City hosts Manchester United on April 30. This match will be academic unless City can close the gap somewhat before then.