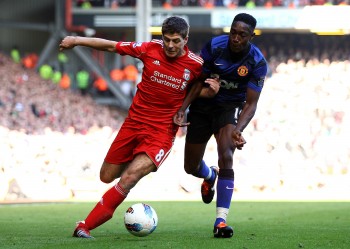 Liverpool's Steven Gerrard (L) made his first start of the season and scored off a free kick. (Clive Brunskill/Getty Images)
Soccer

Javier “Chicharito” Hernandez grabbed an equalizer for Manchester United 10 minutes before the end of normal time to secure a 1–1 draw away to bitter northwest rivals Liverpool, preserving the champions’ unbeaten record.

The Mexican striker’s header cancelled out a Steven Gerrard free kick that had put Liverpool ahead on 68 minutes.

Reds manager Kenny Dalglish gave club captain Gerard a long-awaited first start since his return from a long-term injury. Dalglish told Fox Sports prior to the game, “Steven Gerard is going to enhance any team in the world.”

Gerard made a difference coming on as a substitute in the Merseyside derby last time out, and Liverpool certainly look a much more cohesive unit with their talisman on the field. Last week’s goal scorer Andy Carroll was the unlucky player dropped to the bench to make room for the skipper.

"I’m sure our fans will feel a little bit hard done by with the chances at the end, we could have nicked it," Gerrard told Sky Sports 2.

Only five of the Manchester United side that beat Norwich City retained their places. Chris Smalling and Rio Ferdinand were back from injury to bolster the defense, with Phil Jones given the new role of midfield enforcer.

Club captain Nemanja Vidic was not considered match fit enough for this blockbuster, despite having played for Serbia in midweek, so Jonny Evans kept his place at center back with Patrice Evra retaining the captain’s armband.

The United bench, occupied by the likes of Wayne Rooney, Nani, and Javier Hernandez, looked formidable. With David De Gea back in the United goal, there was a Spanish keeper at either end for the first time ever in the long history of this fixture.

Much of the first half was played out in the middle third of the pitch, with space at a premium. Indeed, 16 minutes passed before there was any sort of attempt on goal as Jones headed Evra’s cross into the side netting.

The best chance of the half came at the other end after 34 minutes. Charlie Adam’s shot was blocked but Luis Suarez picked up the rebound, bamboozled Evans, but then shot straight at De Gea.

The second half was a complete contrast to the dour first period with as much goalmouth action as any spectator could wish for. On 47 minutes, Ashley Young won a free kick, took it himself, and gave Pepe Reina his first shot to save of the afternoon. The Liverpool keeper failed to gather the ball cleanly but no United player was in a position to take advantage of the rebound.

The first really controversial incident came at the 50-minute mark when Jonny Evans appeared to handle in the box, but referee Andre Marriner seemingly judged the contact to have been ball-to-hand rather than hand-to-ball. Five minutes later Suarez tested De Gea with a crisp strike from the edge of the area, and Liverpool started to dominate proceedings.

It was in the 68th minute that Adam went on a strong run through the middle which was terminated when Ferdinand just clipped the outside of the former Blackpool star’s foot. The offence took place just outside the box in classic Steven Gerard territory.

"There was the slightest contact, but I don’t think it was enough to make a fellow of 12 or 13 stone fall on the floor," Ferdinand said.

Truth be told, it was by no means the most spectacular strike of Gerrard’s illustrious career. Ryan Giggs, of all people, inexplicably broke away from the outside of United’s defensive wall leaving a gap through which the ball sailed into the back of De Gea’s net, leaving the young Spaniard hopelessly flat-footed.

Having fallen behind, it was time for Sir Alex Ferguson to play some of his trump cards in the guise of Rooney, Nani, and Chicharito who all came on as substitutes.

United drove forward in search of an equalizer and sure enough it was Nani who took the corner, which was nodded on by Danny Welbeck for Chicharito to nip in and head home as the ball bounced up off the turf in front of him. It was an opportunist goal showing first class technique, the like of which we have now come to expect from Hernandez.

Neither team wanted to settle for a point but it was Liverpool that created the best chances in the final 10 minutes. De Gea made a stunning save from Dirk Kuyt as the Dutch international attempted to turn in Stuart Downing’s cross from the left.

Then Jordan Henderson was foiled by another heroic stop from the United keeper. Henderson had a further opportunity to win it for the Reds with 92 minutes on the clock, but headed over the top.

It has to be said that Liverpool were just about the better side overall and certainly created enough chances to have won it. But United had lost on their last three visits to Anfield so a draw was at least a step in the right direction.

The draw proved costly as Manchester City ascended to the top of the table with a comfortable 4–1 win at home to Aston Villa. Certainly, questions could be asked as to why Ferguson didn’t start Rooney, Nani, and Hernandez, even if they travel to Romania for what should be a straight-forward Champions League match on Tuesday.

Despite giving away the free kick that led to Liverpool’s goal, Rio Ferdinand received the Barclay’s man of the match award for a vintage performance at the heart of United’s defense, although De Gea was equally deserving.