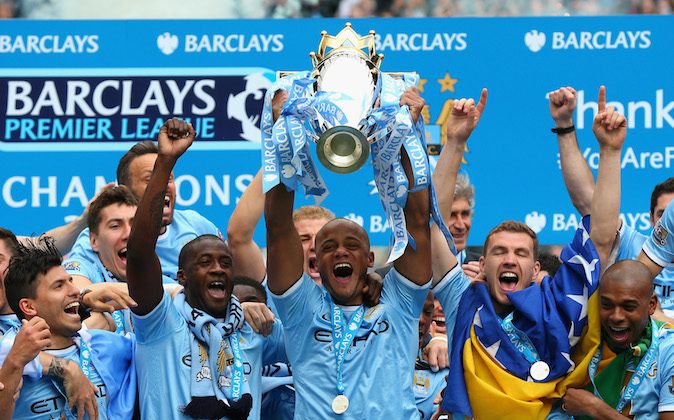 Samir Nasri scored a goal in the 38th minute.

Vincent Kompany added another in the 48th minute.

MANCHESTER, England— Manchester City won the Premier League for the second time in three seasons on Sunday, completing its campaign with a comfortable 2-0 victory over West Ham that lacked any of the drama of its previous title.

Unlike the stoppage-time comeback required in the 2012 title decider, goals either side of halftime by Samir Nasri and Vincent Kompany provided a more serene end to what had been an exhilarating season.

“You can’t repeat what happened last time,” City goalkeeper Joe Hart said. “This year, we’ve really come on strong at the end when we needed to.”

Two years ago, City won the title on goal difference ahead of neighbor Manchester United after coming from behind to beat Queens Park Rangers on the final day. Sunday’s victory, though, meant Liverpool’s 2-1 win over Newcastle at Anfield was meaningless as City finished two points above the Merseyside club.

As soon as the final whistle was blown, thousands of fans flooded onto the Etihad Stadium pitch, setting off blue flares. For a club that has spent so much time in the shadow of United — last year’s champion — it was just the fourth time in its 134-year history that fans could celebrate a league title.

Just 15 years ago, City was playing in the third tier of English football, but the club’s fortunes were transformed after the influx of Abu Dhabi cash following a 2008 takeover.

Making this victory all the sweeter is the fact that United, which beat City to the title by 11 points last May, ended this campaign in seventh place after imploding in the post-Alex Ferguson era.

Although City spent just 15 days at the summit during a campaign when the lead changed hands 25 times, Manuel Pellegrini’s side surged to the top when it mattered most. The 60-year-old Chilean is ending his first season in English football as a double winner, having already won the League Cup victory over Sunderland in March.

However, the league title looked out of reach for City just weeks ago after losing to Liverpool at Anfield. However, Liverpool collapsed toward the end with a loss to Chelsea and a draw at Crystal Palace which meant City only needed a draw at the Etihad to secure the title.

But after an edgy start, Nasri scored with a shot from outside the area in the 39th minute and Vincent Kompany added the second from close range shortly after the break to let fans celebrate for much of the second half.

“Liverpool’s game against Chelsea, I think that’s the twist of the season,” Nasri said.

All City required was a draw, but after an edgy start this energetic and attacking team seized on the opportunity to finish the season in style. Against an uninspiring West Ham, City was in complete control, calmly knocking the ball around the pitch.

However easily City unpicked the West Ham defense, finding a route to goal was proving more difficult. David Silva, so dynamic in this title-winning side, lashed the ball over from distance and Aleksandar Kolarov had a long-range strike tipped over by goalkeeper Adrian.

But the goal that settled nerves in the stands came in the 39th minute, with Yaya Toure teeing up Nasri, who took two touches before curling the shot into the net off the inside of the post.

Although Silva was denied by the woodwork in stoppage time, City’s second came just four minutes into the second half. From a corner, the ball bounced off striker Edin Dzeko, and the unmarked Kompany swept in City’s 102nd league goal this season from close range.

The captain slid across the pitch in celebration, and the party truly started in the stadium. Unlike the rollercoaster season finale against Queens Park Rangers here two years ago, it was job done for City.

West Ham was never going to spoil these celebrations, and City is at the pinnacle of English football once again. The challenge now is retaining the trophy for the first time, and replicating the electrifying domestic form in Europe to conquer the Champions League.

These title celebrations, though, could be short-lived in the City boardroom, with UEFA on the verge of imposing sanctions on the club for overspending in breach of Financial Fair Play rules.