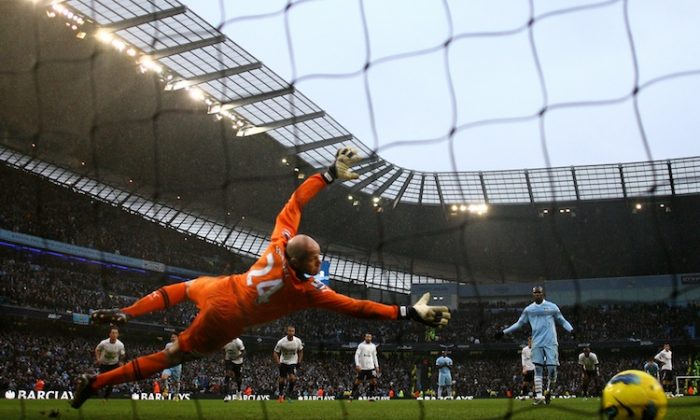 City seemed to have the three points in the bag when they went two up as Samir Nasri and Joleon Lescott netted in quick succession shortly after the break; but Spurs hit back almost immediately with goals from Jermain Defoe and Gareth Bale.

The Londoners can consider themselves unfortunate since they certainly had the better of the second half once they had drawn level at the 65-minute mark. Moreover, Balotelli arguably should not even have been on the pitch to win and score the penalty, as television replays showed he had earlier caught the head of a prostrate Scott Parker with a deliberate stamp that was missed by referee Howard Webb.

Roberto Mancini made one change to the side that won at Wigan last Monday, restoring the fit again Micah Richards to the right back position. In the absence of Vincent Kompany and Yaya Toure, Richards also took the captain’s armband. Mario Balotelli’s ankle problem has cleared up but the Italian striker had to be content with a place on the bench.

Being on loan from City, Emmanuel Adebayor was unable to play for Spurs, so Defoe made only his eighth Premier League start of the season. The Tottenham injury list included Tom Huddlestone and William Gallas, but veteran defender Ledley King was available and replaced Michael Dawson.

Neither side was giving anything away early and for a quarter of an hour most of the play was in the middle third of the field. The first chance of the game fell to City, but Sergio Aguero and Edin Dzeko rather got in each other’s way and the opportunity went begging.

On the half hour Micah Richards won the ball on the right flank and played in Aguero. But American goalkeeper Brad Friedel saved well to deny the Argentinian. The 40 year-old veteran keeper has proved to be an invaluable last line of defense for Tottenham throughout this campaign.

There were plenty of pretty patterns woven by both sets of players during the first half but very little to excite the spectators. Considering the amount of talent on display it was a hugely disappointing first 45 minutes.

The match suddenly burst into life nine minutes into the second half. City had started brightly and David Silva worked a little magic to make space for himself, wrong foot the Spurs back line, and deliver a perfectly weighted pass into the path of Samir Nasri who gleefully hammered the ball past a helpless Friedel.

Before Harry Redknapp’s team had time to even draw breath, they had fallen even further behind. In contrast to the first goal, there was very little artistry involved in the second.

Central defender Lescott powered into the six-yard box for a corner and comically trod on the ball before scrambling it over the line. However, “they all count” as the saying goes.

Yet Spurs were given a lifeline only a minute later when Stefan Savic misjudged a long ball through the middle and Defoe was in. The England striker still had to round Joe Hart and find the net from a 45-degree angle, but that proved to be no problem.

Then on 65 minutes came the goal of the game. The lively Aaron Lennon crossed along the ground from the left wing directly into the path of Gareth Bale who was lurking on the edge of the box.

The Welshman hit it with his favored left foot and Hart was left grasping at thin air as the ball curved away from him into the top corner. It was an absolutely glorious strike from Bale who had been fairly quiet by his standards.

The crowd had been treated to four goals in the space of nine minutes but neither side was able to break the deadlock for the remainder of regulation time.

A minute into injury time Defoe was within inches of scoring from close range, but just failed to direct Bale’s slightly over-hit cross into the City net. Then came the heartbreaking end to the afternoon’s proceedings for the visitors.

In the final minute of stoppage time, Balotelli, who had come on as a substitute for Dzeko, was brought down in the area by Ledley King. It was a clear penalty, which Balotelli took himself and calmly slotted home.

“I was calm, like every time I take a penalty,” Balotelli was quoted as saying to Sky Sports 1.

The home fans were as ecstatic and the visiting fans were despondent, but the City smiles may be wiped away after the league’s adjudicators have examined video evidence of both the aforementioned Balotelli stamping incident, as well as a forearm smash delivered by Lescott to the face of Younes Kaboul that left the Spurs defender in a heap on the turf.

City could easily have been hanging on at the end with only nine men, but it was their day and they have the three points. Manchester City extended their lead to six points over Manchester United, who face Arsenal later in the day.