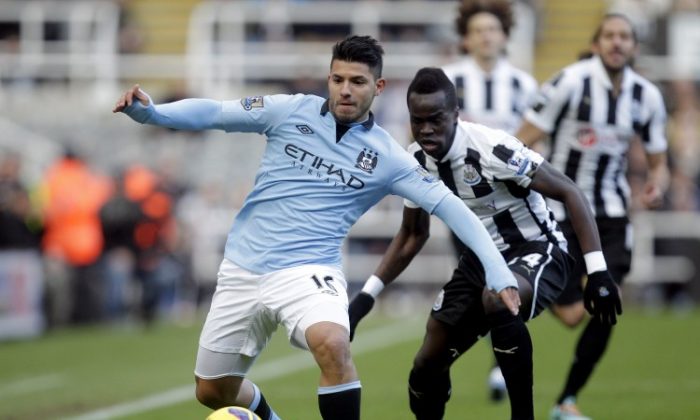 The win keeps City in touch with their local rivals Manchester United at the top of the table and preserves an unbeaten away record going back to last April. The win was set up with a spectacular first half when Sergio Aguero and Javi Garcia found the back of the Newcastle net.

The Magpies fought hard in the second half and pulled a goal back through top scorer Demba Ba, but were finally sunk by stand-in City skipper Yaya Toure, who wrapped things up with 12 minutes of normal time left to play.

For Newcastle, James Perch came into the midfield for his 50th Premier League appearance in place of the injured Hatem Ben Arfa. The Magpies have several other key payers on the injured list with Yohan Cabaye and the two Taylors, Steven and Ryan, being especially missed.

Nonetheless, City boss Roberto Mancini told Fox Sports prior to kickoff “It will be very difficult. To play against Newcastle is always difficult.”

Notwithstanding Mancini’s comment, City had won the last five meetings between the teams, with Newcastle failing to win any of the last 11 games against them. The Magpies’ last success was back in September 2005, when Michael Owen scored the only goal in a 1–0 win at St James’ Park.

With the normally ever-present Gareth Barry serving a one-match ban, Mancini turned to Javi Garcia to fill the holding role in midfield, while Carlos Tevez and Kolo Toure, who were both substitutes in last weekend’s derby, were included from the start, with skipper Vincent Kompany not having recovered from a groin strain. Mario Balotelli did not even manage to get a place on the bench.

Newcastle manager Alan Pardew was confident when interviewed by Fox Sports as City’s “two best center-halves are not playing, so it’s a good opportunity for us.”

His team was indeed fast out of the blocks and in only the second minute of play, City keeper Joe Hart was forced to make an excellent save down low to keep out a snap shot by Papa Demba Cisse.

However, by the time 10 minutes had elapsed, Newcastle’s initial flourish petered out and City took control. The Magpies defense was split apart by a long through ball from Yaya Toure to Samir Nasri who squared to Aguero for the simplest of tap-ins.

City began to show glimpses of the form that won them the title last season, and after some delightful quick short inter-passing, Tevez was foiled only by Newcastle keeper Tim Krul’s legs.

Mancini’s men seemed to be able to pass their way through the Newcastle defense almost at will at this stage, and with 20 minutes on the clock the enterprising Nasri struck the post and Aguero’s follow-up was blocked by Mike Williamson.

Yet the home side was never totally out of the contest, and after 25 minutes Joe Hart was obliged to produce another top class save, this time low down to his left, to keep out an effort by Williamson.

As half time beckoned, City achieved fair reward for some scintillating moves during the first period. An outswinging corner from David Silva was met powerfully by the head of Javi Garcia. The ball really should have been blocked on the line by Davide Santon, but the former Inter Milan defender somehow got his legs in a tangle and failed to keep it out. Still, it was no more than City deserved and Newcastle was left with a mountain to climb in the second half.

To their credit, Newcastle began the second half much as they had started the first and quickly had the visitors on the back foot. On 51 minutes, their inspirational skipper Fabricio Coloccini, one of five Argentines on the field in this encounter, hooked the ball hopefully into the box and ace marksman Demba Ba was the most attentive and he powered an accurate header past Hart.

Just a minute later Cisse, could have tied things up but got underneath the ball as he turned and fired over the top.

In fact, for the next 25 minutes, Newcastle gave it a real go and created a number of half chances without being able to manufacture that clear-cut opening. But they took the game to City and the champions were unable to reproduce their impressive first half display.

As the Magpies ran out of steam, City relieved the pressure and began counter-attacking. David Silva patiently waited on the edge of the Newcastle area for Pablo Zabaleta’s run to the goal line.

Zabaleta made the run, took Silva’s pass, and cut back to Yaya Toure who stuck out a long leg and poked the ball through a forest of legs past Krul.

Newcastle tried in vain to come back but, with only 12 minutes plus injury time remaining, the task was beyond them.

“It was really important,” said Kolo Toure in a postgame interview with ESPN when asked about responding to the loss against Manchester United. “Against United, it was a tough game.”

The result was hard on Pardew’s team who would have earned one point but for Hart in the City goal. The Magpies have now lost six of their last seven league games and have taken just four points from the last 24 available.

At this stage last season, they were seventh with 27 points. It is likely to be something less than a merry Christmas on Tyneside this year.