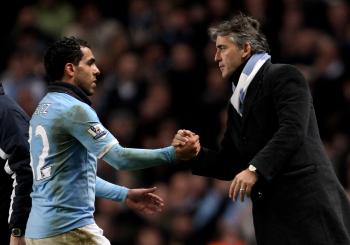 Carlos Tevez and Roberto Mancini are back on good terms after the striker bagged two goals against Wolves on Saturday. (Alex Livesey/Getty Images)
Soccer

By Denis Charlton
Print
Manchester City vaulted their local rivals Manchester United at the top of the Barclays Premier League with a hard fought 4–3 win over Wolves on Saturday.

In many respects it was a less than convincing performance by Roberto Mancini’s star-studded team that last week added $43 million Bosnian Edin Dzeko to the roster. With Mario Balotelli sidelined for at least a month with more knee trouble, Emmanuel Adebayor out of favor and wanting a move, and Roque Santa Cruz back to Blackburn on loan, Mancini would no doubt argue that a quality new striker was essential to maintain City’s Premiership challenge.

Carlos Tevez is never one to be upstaged and the presence of a new strike partner brought out the best in the Argentine whose two goals put him level at the top of the Premier League scorers chart with United’s Dimitar Berbatov on 14 goals apiece.

However, it was not until after the interval that Tevez put his stamp on the match. The first half frankly belonged to Wolves, who went about their business with typical verve and enthusiasm.

Nenad Milijas put them ahead on 12 minutes with an admittedly scrappy goal, but it was not undeserved and Milijas would have had a second if he could have directed a header wide of the keeper.

Then shortly afterwards, Matt Jarvis might have extended the visitors’ lead had it not been for a courageous block by Aleksandar Kolarov. As it was, City clawed their way back into it five minutes before the break when Kolo Toure bounced the ball off a few pairs of legs and into the net from close range.

Both first half goals might have been miserable affairs, more typical of a Sunday morning pub league than the world’s most prestigious, but only three minutes into the second period Tevez produced a moment of sheer class.

Picking up the ball around the right corne of the penalty area, the City skipper brilliantly glided past three Wolves defenders before confidently slotting the ball home. Not surprisingly, this moment of magic galvanized City into action and they enjoyed their best spell of the match.

Just five minutes later, Tevez and Dzeko combined well and a perfectly weighted through ball from the Bosnian put Yaya Toure in for City’s third. Then on 65 minutes, Tevez took advantage of some slack Wolves marking to head in Pablo Zabaleta’s cross virtually unchallenged.

Wolves were not about to throw in the towel and only a further three minutes had passed before Kevin Doyle won himself a penalty, which he dispatched with ease. That made the score 4–2 in favor of City.

Wolves continued to plug away and five minutes from the end of normal time Ronald Zubar pulled another one back. In fact his header was cleared but the ball was adjudged to have already crossed the goal line.

Geoffrey Mujangi Bia might even have salvaged a point for Mick McCarthy’s men but his shot was deflected wide. McCarthy was full of praise for his team’s gallant effort, telling the Premier League website, “I am disappointed we have lost. But most teams would have laid down and had their backsides slapped at 4–1 down. It just shows what spirit the lads have got.”

Arsenal kept the pressure on the two Manchester teams with a comfortable 3–0 win away to West Ham United. The Hammers would have been encouraged by Arsenal’s miserable trip to Ipswich in midweek, but they should be more aware than anyone that odd things can happen in the Carling Cup, particularly when top teams decide to rest key players.

Arsenal was definitely back in the groove, and the opening goal was set up for Robin van Persie by a pinpoint cross along the ground from Theo Walcott and a clever dummy from Samir Nasri. The game was only 13 minutes old at that point and plenty of time for West Ham to try and fight their way back into it, but in fact Arsenal continued to dominate and went further ahead five minutes before the break.

Van Persie was again involved, not only managing to gain control of the ball under pressure right on the by-line, but pulling it back inch perfect into the path of Walcott who gratefully hammered it into the roof of the net.

This was Robin van Persie’s day and the Dutchman put the game beyond West Ham with a calmly taken penalty on 76 minutes after Walcott had been tripped by new West Ham loan acquisition Wayne Bridge.

This may well be the end of the line for West Ham boss Avram Grant. He refused to discuss his position with reporters after the game, but the way he shook hands with all the players, applauded the fans and threw his claret and blue scarf into the stands at the conclusion of an ignominious home defeat was an ominous sign.

Chelsea showed glimpses of their early season form with a 2–0 win at home to Blackburn Rovers thanks to second half goals from Branislav Ivanovic and Nicolas Anelka.

West Bromwich Albion picked up a much-needed three points courtesy of Peter Odemwingie who bagged a brace of goals in his team’s 3–2 thrilling success over Blackpool at the Hawthorns.

Stoke City had a good 2–0 win over Bolton Wanderers with goals from Danny Higginbotham and Matthew Etherington from the penalty spot.

Fulham grabbed a share of the points at Wigan when Andy Johnson’s deflected shot five minutes from time found the net to cancel out Hugo Rodallega’s 57th minute strike for the hosts.