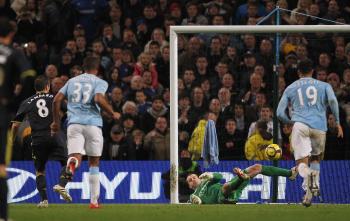 Patrick Hayden
View profile
Follow
biggersmaller
Print
Manchester City’s Shay Given was star of the match as the home team came from behind to beat Premier League leader Chelsea 2–1 on Saturday.

Given, the Republic of Ireland goalkeeper, saved a late Frank Lampard penalty, to preserve the slender one-goal advantage for Manchester City.

Early on, it looked like Chelsea would be stretching their lead at the top of the table after Emmanuel Adebayor had the ball bounce off his back and into his own net.

City kept their heads up and pulled one back in good time just before the break when Adebayor made amends. The Togolese striker got on the end of a fumbled Shaun Wright-Phillips shot and equalized.

Carlos Tevez then gave the lead to City with a 20-yard free kick, which flew in through a hole in the Chelsea wall. Chelsea keeper Petr Cech couldn’t react in time.

City now moves into sixth place in the Premiership with a game in hand on most teams ahead of them. The win also marks an end to a strange streak of seven straight draws.

Chelsea boss Carlo Ancelotti expects City to improve, as he told the BBC. “They will do better in the future,” he said. “They have a very good squad and some very good players.”

“When you change a lot of players you need time to get the right people into the team.”

“Their future is going to be better than their past. They are going to do well, although I don’t know whether it will be this season.”

Chelsea has comfortably locked up top spot in its Champions League group and will face bottom of the group team Nicosia on Tuesday.

A sketchy back pass by Ryan Giggs almost let in Jack Collison to give a lead to the home side, before Paul Scholes blasted one in for the visitors on half time.

Giggs set up Darron Gibson to blast in United’s second and West Ham could only come close with Alessandro Diamanti’s effort.

Wayne Rooney combined with Anderson to set up Antonio Valencia for United’s third. Valencia then set up Rooney to make it four just two minutes later.

Darren Fletcher and Michael Carrick could likely continue their makeshift roles in defense until Nemanja Vidic and Rio Ferdinand are back in action.

For Man United, the win leaves them just two points back of Chelsea and for West Ham they still continue to hover over the relegation zone.

United travel to Germany to face Wolfsburg on Tuesday. It won’t be an easy game for injury-riddled United as Wolfsburg needs to win to reach the knockout stages. United has already qualified but first place in the group is still up for grabs.

The score could have been much worse but Cesc Fabregas had a penalty kick stopped and a goal-bound shot blocked by his own teammate Emmanuel Eboue right on the Stoke goal line.

Arshavin made the breakthrough with a terrific effort as he held off a challenge from a much larger player and directed a shot into the far side of the net.

Arsenal then sealed the points with 10 minutes to go as substitute Aaron Ramsey broke into the penalty area and placed a shot with the outside of his foot past Stoke goalkeeper Thomas Sorensen.

Arsenal boss Arsene Wenger will be glad to celebrate his 500th game in charge of the Gunners with a win as his team moved into third place in the table with a game in hand on the top two teams.

Arsenal has also wrapped up top spot in its Champions League group and will travel to Greece to face Olympiakos. Expect a very youthful Gunners side for that match on Wednesday.

Elsewhere in the Premiership, Liverpool drew 0–0 at Blackburn on Saturday while Tottenham gave up a two-goal lead and drew 2–2 against Everton on Sunday.