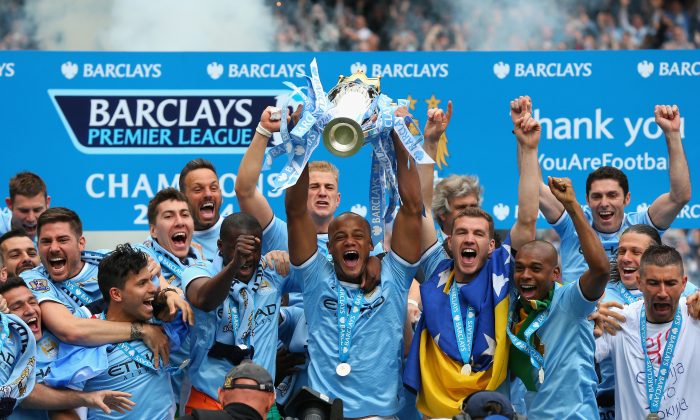 Vincent Kompany of Manchester City lifts the Premier League trophy in celebration along with his teammates at the Etihad Stadium on May 11, 2014 in Manchester, England. (Alex Livesey/Getty Images)
Soccer

A 2–0 win at home over West Ham United on the final Sunday of the English Premier League confirmed that Manchester City would be crowned champions for the second time in three years.

Liverpool had to win their game against Newcastle United at Anfield and pray for the Hammers to perform a miracle. Liverpool had a scare when the visitors took the lead, but came back in the second half to gain a 2–1 victory. Yet it was all to no avail.

In years gone by, West Ham have indeed played the role of party poopers—preventing Manchester United gaining the victory that would have given them the title in 1995 and spoiling the final day celebrations at Old Trafford in 2007 when Carlos Tevez scored the only goal of the game to snatch the three points that kept the Londoners in the Premiership.

This time around, however, the blue Manchester club had no such problems. They looked in control from the outset and there was an air of inevitability about Samir Nasri’s 39th-minute strike that sent the Citizens on their way.

Skipper Vincent Kompany put the issue beyond doubt five minutes into the second half, stabbing the ball home from inside the 6-yard box following a corner. It was fitting that the captain should bag his side’s 102nd goal of the campaign, since it was his miskick that handed victory to Liverpool in the crucial game at Anfield last month.

There was not quite the delirium of two years ago when Sergio Aguero’s injury time goals against QPR stole the title from neighbors United right at the death, but the fans in sky blue still had enough passion for a pitch invasion that actually made it very difficult for some of the players, especially goalkeeper Joe Hart, to reach the sanctuary of the tunnel.

Not that the England keeper minded. He was immediately grabbed by Fox Sports for an interview and was so wound up with emotion he could barely put a sentence together. “Very happy, very proud,” Hart managed to say. “Congratulations to all my teammates.”

Hart also paid tribute to “all the teamwork behind the scenes” throughout the campaign. Nasri was up next and also commented on the excellence of the teamwork throughout the club as well as in the dressing room where ”everyone put his ego to one side.” The Frenchman also took time to pay tribute to the manager who he said has done an ”amazing job” in his first season. “It is a pleasure to work with him,” Nasri went on to say.

Many pundits felt that Roberto Mancini was unlucky to be fired at the end of last season, but it has to be said that the appointment of Manuel Pellegrini by owner Sheik Mansour was a master stroke.

The Chilean’s football know-how and managerial record was never in doubt, but whether he could maintain a happy dressing room and solid team spirit among City’s expensively assembled galaxy of international stars was another matter entirely. There is no question that he has achieved that feat as well as coaching his team into playing a thoroughly entertaining brand of football that has been a delight to watch for much of the season.

And so we come to Liverpool who ended the season so near yet so far away from that league title that has eluded them now for almost a quarter of a century. Let us not forget that Liverpool finished in seventh place last season so this campaign has really been a resounding success and a credit both to manager Brendan Rodgers and his players.

Now that the Reds are back in the Champions League they should be able to attract top talent again as well as being able to hang on to the mercurial Luis Suarez. The young England pair of Daniel Sturridge and Raheem Stirling have been a revelation and have given better support to the Uruguayan up front than anyone could have thought possible. They are only going to improve.

The Reds committed the cardinal sin of daring to dream they had won the title when they beat Manchester City 3–2 at Anfield. That mindset cost them dearly and their inexperience of title races in the modern era was cruelly exposed during the run-in.

City won five on the bounce while their rivals proceeded to lose at home to Chelsea and blow a 3–0 lead to end up with only a single point at Crystal Palace.

In our preview at the start of this season I wrote: “Finally we come to the league’s great underachievers. Can Liverpool seriously challenge for the title again in the foreseeable future or even manage to qualify for the Champions League? Can they hang on to Luis Suarez, and if they do, is the Uruguayan’s abominable disciplinary record worth tolerating for his undoubted talent?”

The answer to those questions I posed is a resounding “Yes.” Liverpool should by no means see missing out on the title as a failure. They have come a long way this year and surely have much to which they can look forward.

So the curtain comes down on another season of the English Premier League. There is usually one great escape act and this year it was Sunderland.

Who could have predicted they would take seven points from visits to Stamford Bridge, Old Trafford, and the Etihad? In fact they were unlucky not to win at City as well but had to settle for a draw.

All three relegation places were decided before the last day, with Norwich, Fulham, and Cardiff dropping down to the Championship.

At the top end of the table, it has been an enthralling campaign with four teams in the title race for much of the season and then three, until the strain of reaching the semifinal of the Champions League in tandem with the Premiership race proved a bridge too far for Chelsea.

Arsenal played their part for many months, but was ultimately unable to keep pace with the other three. Nonetheless they will be back in the Champions League next year.

Tottenham survived the sacking of Andre Villas Boas, who made way for Tim Sherwood, but again failed to make the top four. Europa League football is not really what is required at White Hart Lane.

Everton finished a credible fifth making it a very successful first season in charge for Roberto Martinez. What’s more, the club’s 72 points were amassed in fine style employing an attractive brand of football. By contrast, his predecessor David Moyes didn’t manage to see out one full year of a six-year contract. The “chosen one” will now go down in the annals of United history alongside other notable failures such as Frank O’Farrell, Dave Sexton, and Wilf McGuiness.

Overall, Manchester City was the best and most consistent side throughout the campaign and deserved their triumph. Liverpool ran them closer than anyone expected but as Pellegrini told Eurosportnews TV after the West Ham game, they were naturally disappointed by the loss at Anfield but felt, “We didn’t deserve to lose,” and so were not too downhearted.

City has the money, the players, and they now have team spirit and a never say die attitude. Of course they still have to prove themselves in the European Champions League, but domestically they are the cream of the crop.