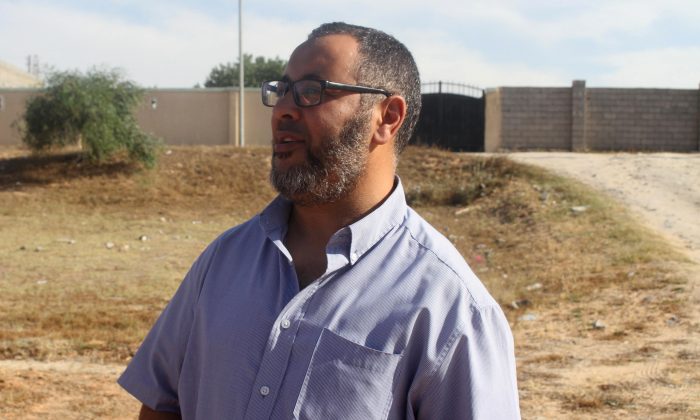 Ramadan Abedi, the father of Salman Abedi, the suspected bomber who killed 22 concert-goers in an attack in Manchester, England May 22, in Tripoli, Libya, May 24, 2017. (REUTERS/Hani Amara)
Europe

Manchester Bomber’s Father Certain Son Did Not Carry Out Attack

The father of the bomber who killed 22 concert-goers in an attack in Manchester told Reuters in the Libyan capital on May 24 that he had last spoken to his son some five days ago, by phone, and “everything was normal.”

Ramadan Abedi, who was detained by a Tripoli counterterrorism force during the interview, said his son Salman had told his family that he was heading on pilgrimage to Mecca.

“I spoke to him about five days ago … there was nothing wrong, everything was normal,” Abedi said. He did not say where his son was at the time.

Another of Abedi’s sons, Hashem, was detained in the evening of May 23 in Tripoli on suspicion of links to ISIS, said Ahmed Bin Salem, a spokesman for the Special Deterrence Force, also known as Rada.

Police scrambled to close down a network around the Manchester suicide bomber with arrests in Britain and Tripoli on May 24, as details about the investigation were leaked to U.S. media, infuriating authorities who fear a second attack is imminent.

British-born Salman Abedi, 22, who was known to security services, is a suspect in the killing of 22 people at a concert venue packed with children on May 22. Abedi was born in Manchester in 1994 to Libyan parents.

A suicide bomber blew themselves up the night of May 22 at the Manchester Arena indoor venue at the end of a concert by U.S. pop singer Ariana Grande, attended by thousands of children and teenagers.

Authorities believe the suicide bomber had help in building the bomb, which photographs published by the New York Times showed was sophisticated and powerful, and that his accomplices could be ready to strike again.

Manchester police arrested nine men on May 24 and one woman who they later released, bringing the total held for questioning to nine, and searched multiple addresses in northern and central England.