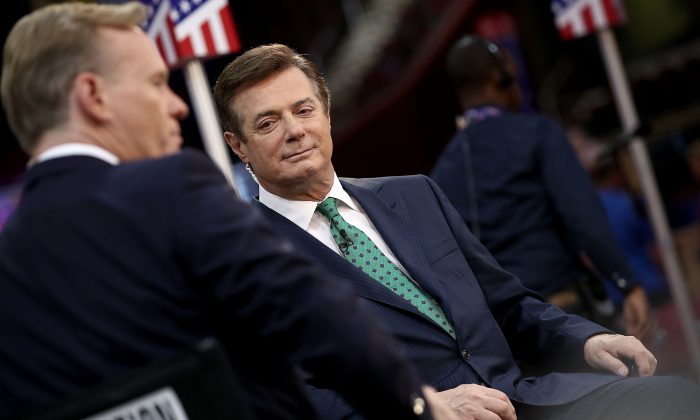 Paul Manafort (R) is interviewed on the floor of the Republican National Convention at the Quicken Loans Arena in Cleveland on July 17, 2016. (Win McNamee/Getty Images)
Crime and Incidents

Paul Manafort and his business partner, Richard Gates, were indicted on Monday on a number of charges stemming from political consulting and lobbying work they did between 2006 and 2015.

According to the indictment, Manafort and Gates did not register as foreign agents for their lobbying on behalf of the government of Ukraine between 2006 and 2015. During that time they also worked for the Party of Regions, headed by then-President Viktor Yanukovych, and then the Opposition Bloc, which succeeded the Party of Regions after Yanukovych was ousted.

Manafort and Gates made tens of millions of dollars for their Ukraine work and used foreign companies, partnerships, and bank accounts to hide it from the U.S. government, according to the indictment.

They also lied to authorities when questioned over their connections to Ukraine.

Manafort, who has historically lobbied with both Democrats and Republicans, was hired by the Trump campaign as convention manager for the Republican National Committee (RNC) convention in March 2016.

At that time, there were concerns in the Trump campaign that some Republican delegates might bolt and choose a different candidate. Manafort was brought on for his successful work in managing the convention floor for Gerald Ford, Ronald Reagan, and George H.W. Bush.

“Paul is a great asset and an important addition as we consolidate the tremendous support we have received in the primaries,” Trump said in a statement on March 29, 2016.

After a successful RNC convention, and Trump having clinched the Republican nomination, Manafort was promoted to become the campaign chairman.

However, five months after having joined the campaign, Manafort was forced to resign just days after The New York Times had reported that he had received $12.7 million in undisclosed cash payments from Ukraine. The indictment notes that Manafort was hiding his Ukraine payments from 2006 until at least 2016.

“I think my father didn’t want to be distracted by whatever things Paul was dealing with,” Eric Trump told Fox News following the resignation.

The indictment against Manafort and Gates was signed by special counsel Robert Mueller, who has been tasked to investigate potential Russian interference during the 2016 elections. The charges filed against Manafort only seem loosely related to his original mandate.

Mueller himself has come under fire over the past week for his role in a uranium deal that the Obama administration approved with Russia despite the FBI having knowledge of bribery.

The Hill reported on Oct. 17 that Russia had run a sophisticated bribery campaign to get U.S. officials to agree to the deal.

Former President Bill Clinton received $500,000 in a speaking fee from a Kremlin-linked Russian investment bank while the deal was being negotiated, and while his wife, Hillary Clinton, served as Secretary of State.

Russian investors linked to the uranium deal also made over $10 million in donations to the Clinton Foundation, The New York Times reported in April 2015.

According to The Hill, the Obama administration passed the deal, despite the FBI being aware of the Russian bribery campaign.

Mueller served as FBI director at the time. He flew to Moscow himself in 2009 to provide Russia with a sample of 10 grams of highly enriched uranium (HEU).

President Donald Trump responded on Twitter on Monday to the indictments of Manafort and Gates, saying the charges relate to events years ago. He questioned why Hillary Clinton and the Democrats aren’t the focus of Mueller’s investigation and noted the indictment shows no collusion between his campaign and Russia.

Sorry, but this is years ago, before Paul Manafort was part of the Trump campaign. But why aren't Crooked Hillary & the Dems the focus?????

….Also, there is NO COLLUSION!

The Washington Post reported last week that Hillary Clinton’s campaign and the Democratic National Committee (DNC) had paid Fusion GPS to produce a dossier on Trump that relied on only Russian government sources.

The report was written by former British spy Christopher Steele, who used his connections to Kremlin sources for claims made in the dossier. While many of the scandalous claims in the report have since been debunked, at the time it was spread among media organizations and politicians in an effort to influence them. Media outlets chose not to report on it because the claims in the dossier could not be verified, but BuzzFeed first made it public in January.

The Washington Post reported that the Clinton campaign hid the payments to Fusion GPS by routing them through a law firm and misreporting the expense to the FEC as legal expenses.