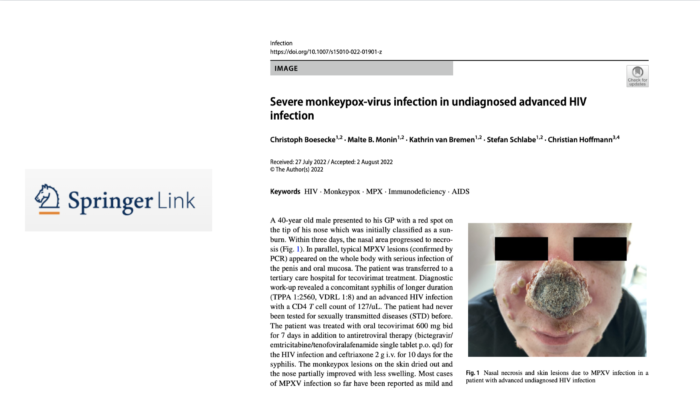 A middle-aged man in Germany developed severe skin lesions due to infection with monkeypox in recent days. The skin on his nose decayed and had turned black, and white abscesses formed on his body. He was found to be positive for syphilis and HIV after testing. The doctor pointed out that the immunity of the patient was weakened by the HIV virus, making the skin more susceptible to infection and necrosis, therefore the symptoms of such a severe infection appeared.

The case was published in the latest issue of the medical journal Journal of Infection. A 40-year-old German man went to his GP with red spots on his nose and was diagnosed with sunburn.

After only three days, the condition worsened significantly. The wound on the patient’s nose began to turn black and necrotic, leaving a painful and swollen scab.

Meanwhile, pustules with white fluid formed all over his body, especially in the genital and around the mouth.

The patient sought medical advice urgently and was confirmed to be infected with monkeypox after conducting a nucleic acid test.

Because the patient had never been checked for sexually transmitted diseases, doctors conducted testing on him subsequently and found that he was also positive for syphilis and HIV.

The patient’s condition had improved after being transferred to a tertiary care hospital for treatment, monkeypox lesions on the skin became dry, conditions of part of the nose were improved, and swelling had been reduced, but he has not yet recovered completely.

The doctor said that since the patient was infected with syphilis and HIV but he has not been treated, his immune function was impaired, which accelerated the condition of the monkeypox, and the skin was more prone to lesions, and infection and necrosis occurred.

Paul Hunter, the public health expert at the University of East Anglia in the United Kingdom, pointed out that monkeypox and smallpox belong to the same virus family.

The smallpox virus attacks skin cells and causes necrosis of the face and nose. Therefore these kinds of symptoms may take place in severe monkeypox cases.

​​​​As monkeypox continues to spread, such severe cases may become more common.

According to WHO statistics, since the first monkeypox outbreak occurred in the UK in May this year, more than 35,000 cases have been reported in 92 countries around the world.

There were nearly 7,500 new cases worldwide last week, an increase of more than 20 percent from the previous week, mainly among men who have sex with men.