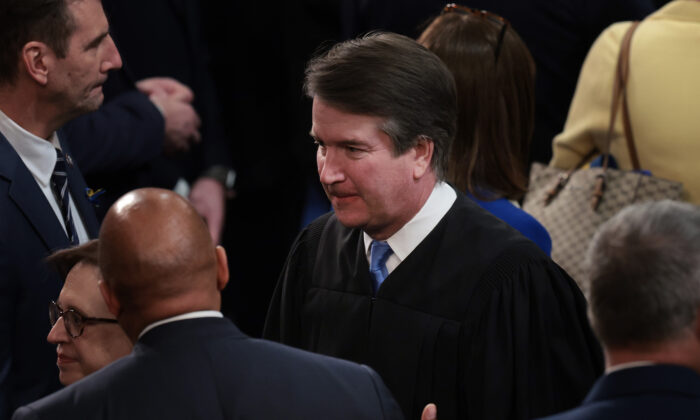 Man Who Tried Killing Brett Kavanaugh Was ‘Shooting for 3’ Justices

The California man who’s facing life in prison after confessing to attempting to kill Supreme Court Justice Brett Kavanaugh told an associate that he wanted to murder three justices in a bid to “change the votes for decades to come,” according to new court documents.

Nicholas Roske, who flew to Maryland in June and exited a taxi outside Kavanaugh’s home before calling the police on himself, told the associate in a chat on Discord that he was “gonna stop roe v wade from being overturned,” an FBI agent said in one of the documents.

“What u tryna do,” the associate asked.

Roske wrote, “Remove some people from the supreme court.”

After the person suggested that doing so wouldn’t accomplish much, Roske outlined his plan, saying he “could get at least one” and was “shooting for 3.”

“All of the major decisions for the past 10 years have been along party lines so if there are more liberal than conservative judges, they will have the power,” he said.

The chat happened on May 25, after Politico published a leaked draft decision indicating that the Supreme Court was poised to strike down Roe v. Wade, the 1973 court ruling that declared access to abortion a constitutional right and barred states from imposing many restrictions on abortion.

The court ultimately did strike down the earlier ruling, after Roske was arrested.

The chat was reviewed by the FBI with permission from the associate, who hasn’t been charged.

Authorities previously said Roske informed them after his arrest that he wanted to kill Kavanaugh because of fears the Trump appointee would help strike down Roe v. Wade and a gun-control law in New York.

The FBI submitted the information in support of a request for a search warrant to seize records from Discord, Google, and Reddit accounts that were used by Roske.

Gaining access to the accounts will help obtain evidence of a crime, illegally possessed items, and property intended for use or used in committing a crime, according to the search warrant application.

Roske’s public defender didn’t respond to a request for comment.

Agents already obtained permission to extract data from Roske’s phone, from which they identified many of the accounts.

Agents discovered that Roske, between May 5 and June 8, searched on his cell phone for “quietest semi auto rifle,” “Reagan assassination attempt,” “most effective place to stab someone,” “supreme court,” and “assassin skills.”

Roske also visited the “current members” page on the Supreme Court’s website and a Wikipedia entry titled “List of assassinations.”