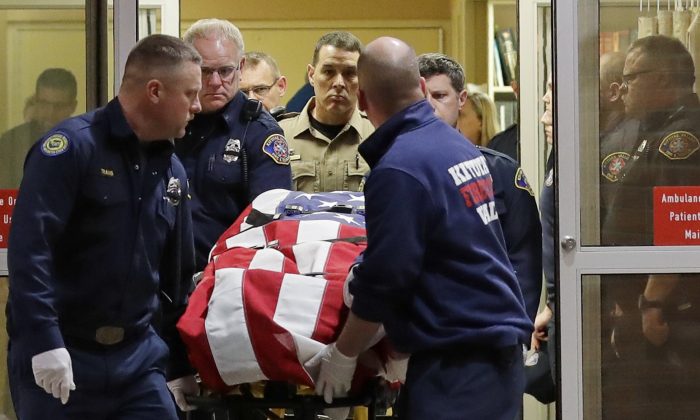 The body of a Kittitas County Sheriff's deputy is draped with a U.S. flag as it is carried out of Kittitas Valley Healthcare Hospital in the early morning hours of March 20, 2019, in Ellensburg, Wash. (Ted S. Warren/AP Photo)
US News

Man Who Killed Deputy Was in US Illegally

The federal government said the man who killed a sheriff’s deputy and wounded a police officer in a central Washington state shootout was in the United States illegally.

The U.S. Immigration and Customs Enforcement agency said on March 21 that the suspect, 29-year-old Juan Manuel Flores Del Toro, who also died as a result of the shootout, was a citizen of Mexico.

The agency said he entered the U.S. in 2014 at Laredo, Texas, on a temporary agricultural worker visa, and it has no record of Flores Del Toro leaving the country or extending his visa.

Police have said he lived in Ellensburg, Washington.

Sheriff’s deputy Ryan Thompson was killed and Kittitas police officer Benito Chavez was shot in the leg in the gunfight Tuesday night near Ellensburg.

The events unfolded when the two officers tried to stop the suspect’s vehicle after authorities received a complaint about the motorist’s driving, said Ellensburg Police Chief Ken Wade.

Flores Del Toro was chased by police until he stopped the car near the town of Kittitas. He got out and exchanged gunfire with the sheriff’s deputy and the police officer, Wade said.

“It was reported as a road-rage type event, with erratic driving on the part of the suspect,” said Wade, whose office is investigating the incident.

Deputy Ryan Thompson, 42, was killed and officer Benito Chavez, 22, was shot in the leg, suffering a shattered femur. He was hospitalized Thursday in satisfactory condition.

The suspect died at a hospital. Authorities did not provide information about how many times he was shot and Wade said he did not know how many shots were fired overall by the officers and the suspect.

Thompson had been a law enforcement officer for years, joined the sheriff’s department in 2013 and is survived by his wife and three children, said Kittitas County Sheriff Gene Dana.

“Our community has a very heavy heart today,” Dana told reporters. “This officer was a great officer.”

It was the first fatal shooting of a law enforcement officer in the rural county in 92 years, he said.

Wade said authorities have no other information besides the road rage incident for what might have prompted the suspect to flee and exchange gunfire with the officers.

KHQLOCALNEWS: RT patrickerickson: Extremely emotional moments as the body of Kittitas Deputy Ryan Thompson is escorted by a long line of law enforcement here to a funeral home in Ellensburg. KHQLocalNews pic.twitter.com/dcGckjrTP7