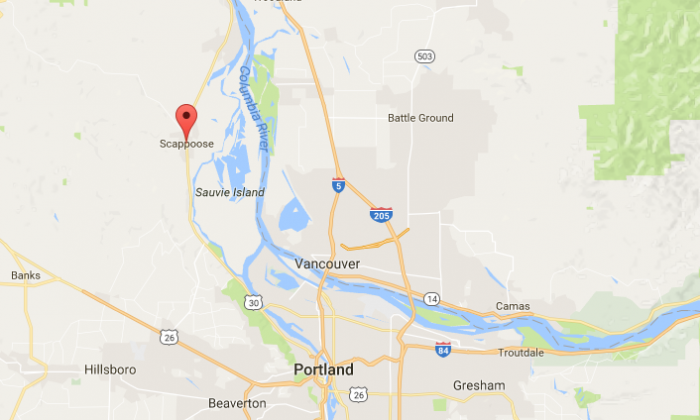 The approximate location where Douglas Parsons spent the night trapped in his crashed car near Scappoose, Ore., on Nov. 2, 2017. (Screenshot via Google Maps)
Crime and Incidents

Man Trapped in Car for 12 Hours After Crash

A man spent some 12 hours trapped in his car after he got off the road and crashed into trees in Columbia County, Oregon.

Douglas Parsons, 45, was driving down the Dutch Canyon Road near Scappoose, some 10 miles northwest of Portland on Thursday, Nov. 2, at about 8:30 p.m. when he drove his car over an embankment, and pinned it against trees.

A disabled veteran, Parsons couldn’t free himself or reach his cellphone. He waved a flashlight at cars passing by, but nobody saw him or stopped.

Dave Miller walked across his pasture on Friday morning, spotted the car, and called police.

Firefighters had to cut off the roof of Parsons’s Subaru and it took six of them and a rope to lift him out of the wreck.

“He was talking while they were cutting him out and everything. But he’s going to have a long road,” Miller told KATU 2.

Parsons was taken to a hospital with broken ribs and swelling caused by the seat belt. He was being held in the hospital overnight as a precaution.

Update: man has been removed from car and transported. This is off Dutch Canyon Rd. near Scappoose. Gathering info #LiveOnK2 https://t.co/hSoyBK0bay

Speed and road conditions likely contributed to the crash, according to the Columbia County Sheriff’s Office, KATU 2 reported.

Miller, who lived in the area for 30 years, said he saw two cars go off the road on the same curve. The county is considering installing a guardrail along that part of the road.

A similar situation occurred two years ago in Pennsylvania. A driver crashed into a creek in Montgomery County and only the next day, after about nine hours, did a police officer noticed the car and called for a rescue. The firefighters had to cut off the doors and the dashboard to free the man.