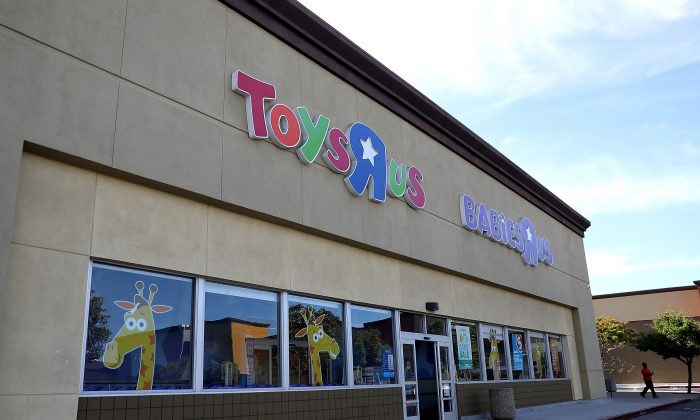 A pedestrian walks by a Toys'R'Us store on Sept. 19, 2017 in Pinole, California. (Justin Sullivan/Getty Images)
US News

A New Jersey man is making headlines for his selfless act of kindness this holiday season.

The man, identified only as Charlie K. strolled into a Toys”R”Us store in Cherry Hills, New Jersey and paid off over 60 people’s orders on Christmas toys.

In total, Charlie spent $10,789 for 62 strangers’ layaway orders, according to NBC affiliate KXAN.

His good deed did not stop there—after paying off the layaway accounts he also asked all the people in the store to pick out three toys for him to buy and donate to Toys for Tots (a charity program that distributes toys to those in need).

“The Marines and Toys for Tots are one of the best organizations,” Charlie told CBS News. “I don’t want to forget them.”

The bill for paying for everyone’s toys in the store came up to an additional $2,000, ABC affiliate KSAT reported.

According to KSAT, Charlie now has a new nickname—the “Layaway Angel.”

One consumer, Stephanie Dawson, went to the Toys”R”Us store after hearing the news and found out that her layaway cart was one of the 62 that was paid off.

She had seven presents she bought on layaway for her grandchildren. Her order amounted to $200.

“I want to say thank you very much and I appreciate it and thank god for you,” Dawson told KSAT.

Another shopper, Jessica Key, walked into the store on Black Friday, Nov. 24 planning to pay the full price for her layaway order, only to get the surprising news.

“They come over and tell me someone actually paid the layaway,” Key told KSAT. “Definitely an early Christmas and I want to say thank you to the gentleman that came in and donated. It’s like the best feeling, thank you.”

Charlie told CBS that he often gives back to his community, but this was the first time that he had done anything as big as what he did in the toy store.