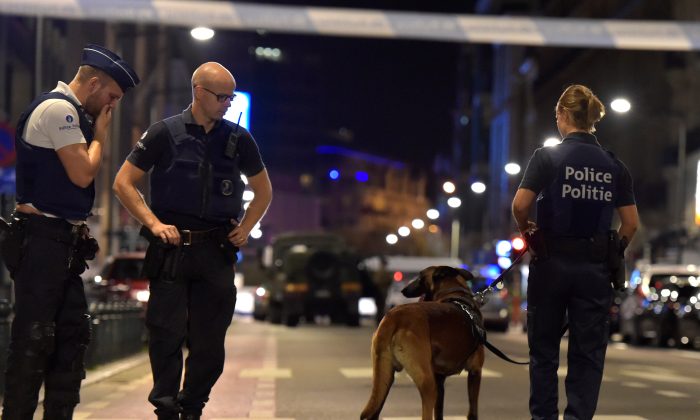 Policemen react on the scene after Belgian soldiers shot a man who attacked them with a knife, in Brussels, Belgium on Aug. 25, 2017. (REUTERS/Eric Vidal)
Europe

BRUSSELS – Belgian soldiers shot dead a man in the center of Brussels on Friday evening after he came at them with a knife shouting Allahu Akbar (God is great), in a case authorities are treating as a terrorist attack.

The man, a 30-year-old Belgian of Somali origin, died after being rushed to hospital. The soldiers were not seriously hurt in the attack; one had a facial wound and the other’s hand was wounded.

Prosecutors said the man, who was not known for terrorist activities, had twice shouted Allahu Akbar during the attack, which occurred at around 8:15 p.m. local time just outside the city’s central pedestrian zone while the soldiers were on patrol.


The case passed from local to federal prosecutors, who typically handle terrorist cases. A spokeswoman for the prosecution service said they were treating the case as one of attempted terrorist murder.

Brussels mayor Philip Close said the alert status, already just one off the maximum level, had not been increased.

“Initial indications are … that it is an isolated attack, a single person,” Close told reporters beside a street blocked by police.

Soldiers routinely patrol the streets of the Belgian capital due to a heightened security alert level after Islamist shooting and bomb attacks in Paris in 2015 and Brussels in 2016.

In June, troops shot dead a suspected suicide bomber at Brussels’ central train station. There were no other casualties. Authorities treated the incident as an attempted terrorist attack.