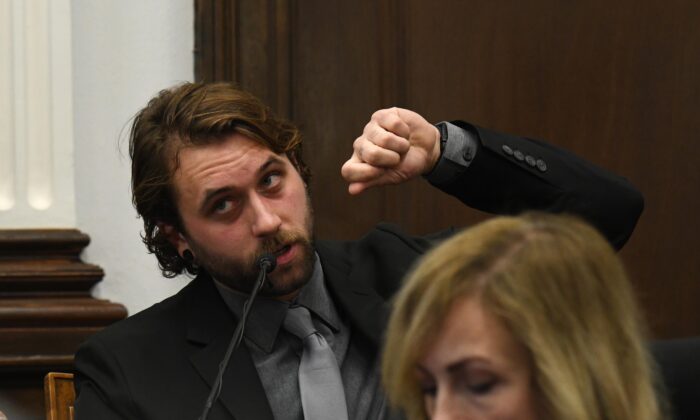 Gaige Grosskreutz, who was shot by Kyle Rittenhouse, testifies during Rittenhouse's trial at the Kenosha County Courthouse in Kenosha, Wis., on Nov. 8, 2021. (Mark Hertzberg/Pool/Getty Images)
US News

A man shot by Kyle Rittenhouse in Kenosha, Wisconsin last year now says he was not pointing his gun at the teenager.

Gaige Grosskreutz said under oath that he was pointing a handgun he took with him into Kenosha on Aug. 25, 2020, at Rittenhouse when the teenager shot him.

“It wasn’t until you pointed your gun at him, advanced on him with your gun—now your hand’s down—pointed at him, that he fired, right?” one of Rittenhouse’s lawyers, Corey Chirafisi, asked Grosskreutz in court this week.

But the Milwaukee man insisted during his first interview after taking the stand that he was actually not pointing his gun at Rittenhouse.

“It’s completely inconsistent with the physiology of my wound that he would have shot me while my weapon was pointed at his head,” he added.

Host Michael Strahan noted that Grosskreutz was not under oath before seeking to clarify his remarks.

“So you’re saying that you actually didn’t, you weren’t pointing your gun at him? Is that what you’re saying?” he asked.

Mark Richards, Rittenhouse’s lead defense lawyer, declined to comment in an email to The Epoch Times.

Grosskreutz was pressed on his story changing during a later appearance on CNN, with host Anderson Cooper playing the clip that showed the man in court saying he was pointing his gun at Rittenhouse.

“During cross [examination], if there’s a skilled attorney, they’re able to present questions to help support their narrative. That’s their job,” he said. “And with one of the exhibits that attorney Chirafisi had introduced, there’s a photo of me with my gun pointed towards the defendant, either just after or right during [sic] he had shot me in my right arm.”

Grosskreutz alleged that the only way he could have sustained the injury he did “is if I had been shot with my arms up.”

Asked if he had ever pointed his gun at Rittenhouse, Grosskreutz said that it did appear that way in the photograph.

“It certainly looks like it, but never intentionally,” he said. “Following that gunshot, I had no use of my arm.”

Both Grosskreutz and his lawyer also repeated his claim that Rittenhouse re-racked his AR-15 just before shooting the Milwaukee man last year.

Rittenhouse said on the stand this week that the claim wasn’t true, and he was backed by testimony from Kenosha police officer Brittni Bray.