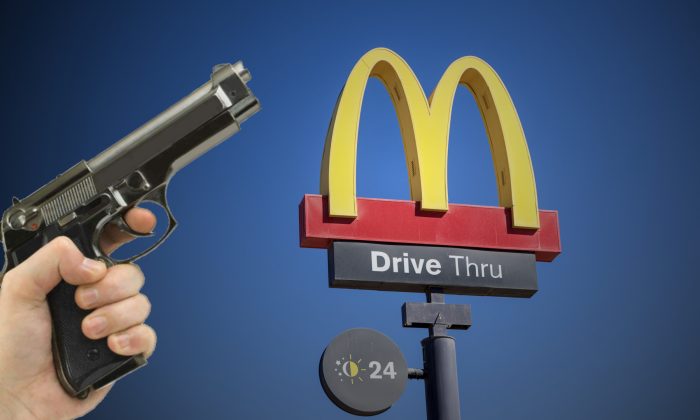 A man pulled gun on a McDonald's drive-thru employee because the restaurant was out of Egg McMuffins. (Philip Lange / Shutterstock)
Crime and Incidents

A police manhunt is on for a disgruntled McDonald’s customer who threatened a drive-thru worker with a gun after being told the restaurant was out of Egg McMuffins.

Police said the fast-food restaurant employee told them the male driver shouted obscenities at her and brandished a firearm when told none of the breakfast sandwiches were available for him and his passenger, according to the Associated Press. The driver then continued to curse at the worker and drove away with his companion.

Police say the man pulled out a gun after being told there were no McMuffin sandwiches available https://t.co/6npUqylnmP

Police say the man pulled out a gun after being told there were no McMuffin sandwiches available.

The employee said she had never seen the two suspects before and provided a description to the authorities, according to the police report.

The two men inside the car, who remain at large, are said to be around 20 years old, according to the Vindicator.

Local investigators intend to rely on surveillance footage and the victim’s eyewitness account to identify and apprehend the perpetrators.

The incident occurred shortly after 3:30 a.m. at a McDonald’s in Warren, a small town in Northeast Ohio.