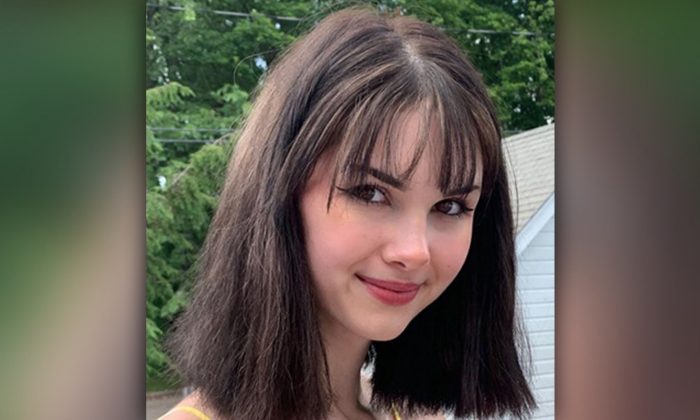 Bianca Devins, a 17-year-old with a notable social media following, was killed in upstate New York on July 14, 2019. (Utica Police)
Crime and Incidents

Police said a 17-year-old girl with a notable Instagram following was murdered in upstate New York by a man who then posted photos of her corpse online, sparking shock and horror.

Users of the Discord platform who saw the gruesome photos on Sunday, July 14, alerted the authorities to a possible crime, Utica Police said in a statement. Officers “began an in-depth search for the male and female” and later that day located the suspect, 21-year-old Brandon Clark, after he called 911 “and made incriminating statements with respect to the homicide.”

The victim has been identified as Bianca Devins, who on Instagram goes by the handle escty with a following of nearly 100,000. CNN reported Devins had a following across multiple platforms, where she shared photos and details about her life.

Utica Police said that when they arrived at a wooded area, they found Clark laying on the ground outside a vehicle.

“The officer approached this male,” police said, “and almost immediately, he began to stab himself in the neck with a knife” and lay down on top of a green tarp.

Police disarmed Clark and “after a brief struggle” took him into custody.

Investigators noticed “brown hair protruding from beneath the tarp” and when they uncovered it, found Devin, who had “suffered extensive injuries to her neck, and was obviously deceased.”

Clark was taken to St. Elizabeth’s Hospital where he underwent emergency surgery. While noting that his injuries were severe, police said he was expected to survive.

In an update on Monday, Sgt. Michael Curley of the Utica Police Department told NBC that Clark had been charged with second-degree murder. He added that the suspect was in custody at Oneida County Jail in upstate New York.

The girl’s family said in a statement: “Bianca, age 17, was a talented artist, a loving sister, daughter, and cousin, and a wonderful young girl, taken from us all too soon. She is now looking down on us, as she joins her cat, Belle, in heaven.”

Devins had planned to attend Mohawk Valley Community College in Utica in the fall, her family said.

“Bianca’s smile brightened our lives. She will always be remembered as our princess.”

Police said Devins and Clark met on Instagram about two months ago.

“They utilized this as a means of communication primarily, and their relationship progressed into a personally intimate one,” police said. “They had spent time together, and were acquainted with each other’s families.”

Lt. Coromato told WKTV that family members had contacted the police to express concern about the pair’s relationship.

“We got a call from one of the parents that was concerned about some things that were occurring in the relationship at this point,” Coromato said. “At this point that call along with what occurred is still under investigation so we have nothing further to release at this point on that.”

A mutual friend told Rolling Stone that their relationship was “strictly platonic.”

The murder suspect posted photos of the victim’s body and messages relating to her death.

Rolling Stone reported that after posting the grisly images, Clark posted several videos on the Instagram story for his account, including a photo of a dark road taken from the driver’s seat with the caption: “Here comes hell. It’s redemption, right?”

These gruesome images were reposted, with internet users expressing their disgust and urging the photos to be taken down.

WSYR-TV reporter Julia LeBlanc posted a photo from a home believed to be the residence of the murder suspect and people used the opportunity to comment on the horrific photos Clark had posted.

A murder near the start of the 15K Boilermaker Road Race has now lead police to this home in Cicero right off of Route 298. Stick with @NewsChannel9 throughout the night for details. #LocalSYR pic.twitter.com/DWTqzmc3lz

One person commenting on the post said the gory photos “have spread across the internet and are still present on the killer’s social media PLEASE look into somehow taking them down.”

“You can’t really take down this type of stuff,” someone replied. “From IG, yes, but from 4chan, good luck. I hate to be the one to say it, but these wouldn’t be going around if he himself had not posted them on IG and boasted about it on a discord server full of anons.”

“Yeah I’m aware of the 4chan link; a friend posted it but deleted it as to not bring more traffic to the photos,” the original commenter replied. “The thread is archived but I don’t think it can be deleted. It’s sad, reddit and 4chan have full gore communities that publicize this stuff. I’m genuinely sick.”

LeBlanc later posted a photo of a message purportedly scrawled on the pavement by Clark reading, “May you never forget me.”

BREAKING: Police have confirmed 21-year-old Brandon Clark of Cicero is the suspect in the homicide of 17-year-old Bianca Devins of Utica Sunday morning. Police say they were in a relationship for about 3 months before her death. They believe he left this message @NewsChannel9 pic.twitter.com/5sTfaVHDER

“This is so sick. Rip Bianca,” a commenter responded to the post.

Another person commented, “OK. Time to stop announcing his name.”

“Our thoughts go out to those affected by this tragic event. We are taking every measure to remove this content from our platforms,” Instagram spokeswoman Stephanie Otway told Fox News.

“We are shocked and deeply saddened by this terrible situation. We are working closely with law enforcement to provide any assistance we can. In the meantime, our hearts go out to Bianca’s family and loved ones,” a Discord spokesperson told CNN.