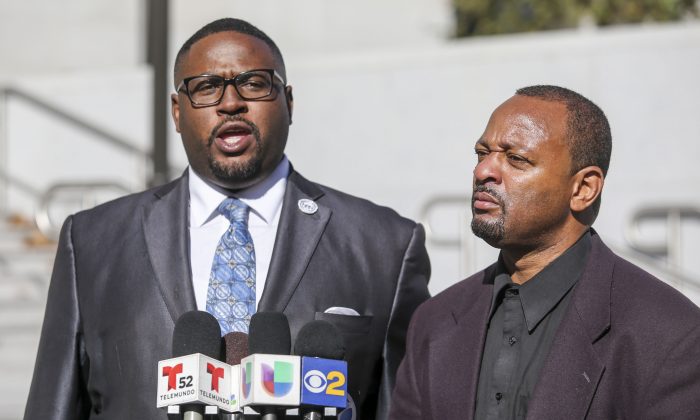 Najee Ali, right, and Rev. K.W. Tulloss speak to reporters in front of the Hall of Justice building during a news conference about Saturday's fatal shooting of a man by Los Angeles County Sheriff's deputies in Lynwood, Sunday, Dec. 13, 2015, in Los Angeles. (AP Photo/Ringo H.W. Chiu)
Crime and Incidents

Man Killed by LA Deputies Had Gun in His Hand, Officials Say

LOS ANGELES—The first 911 caller reported seeing a black man walking down a street shooting a gun in the air. Authorities said they received five more similar calls from witnesses alarmed by what they saw.

The encounter in the south Los Angeles suburb of Lynwood on Saturday was captured on video and it shows deputies continuing to fire at 28-year-old Nicholas Robertson after he fell and crawled on the pavement.

Investigators said two deputies fired 33 bullets at Robertson after he refused to drop the gun and walked across a busy street to a filling station where a family was pumping gas.

“When he collapsed, his arms were underneath him, and the gun was still in his hand. There was never a time when the weapon was not in his possession,” homicide Capt. Steven Katz said Sunday in response to questions about why the deputies continued to fire on the man after he fell.

Authorities released a close-up from security footage showing Robertson stretched out on the ground with a gun in his hand.

The deputies confronted Robertson as they investigated 911 calls from the witnesses who said a man was walking down a residential street and then through a busy commercial area holding a weapon and acting strangely.

Witnesses told authorities that Robertson fired six to seven rounds and briefly went into a car wash and a pizza parlor before deputies arrived.

The deputies spotted the man in front of the gas station, where two women and three children were inside a car, and they ordered him to drop the gun, Katz said. But he refused and at one point pointed the gun in the deputies’ direction, Katz added.

The gun was not registered to Robertson and has not been reported stolen. Detectives are trying to track it, Katz said. He said the gun was not loaded but that detectives found two live rounds “in his grasp.”

Robertson may have been in a dispute at home with his spouse before he went out on the street, but authorities have yet to verify that report, Katz said.

Robertson’s wife told the Los Angeles Times her mother-in-law had called her shortly before the shooting to say her husband was under the influence of alcohol. She said she was on her way to get him and had stopped at the same gas station to buy milk before the shooting happened.

Nekesha Robertson said her husband was a stay-at-home father devoted to the couple’s 7-year-old daughter and 6-year-old twins — a boy and a girl — and didn’t engage in crime.

“Anytime you see him, you see him with the kids,” Nekesha Robertson said. “He’d take them to and from school. Help them with homework. He’s a daddy — that’s his job. He didn’t do nothing else.”

Other family members said the shooting was unjustified and that Robertson may not have heard the deputies’ command to drop the gun.

“This man never turned at you and looked at you or pointed the gun at you. Nothing,” said Nekesha Robertson’s cousin, Monica Reddix. “What they did yesterday was … point-blank murder.”

Robertson’s death comes at a time of increasing criticism of police use of force after several killings of black men by officers have been caught on video in California and throughout the nation.

On Dec. 2, five San Francisco officers shot and killed Mario Woods, 26, in the city’s gritty Bayview neighborhood after they say he refused commands to drop an 8-inch knife he was carrying. Police were responding to a stabbing report when they encountered Woods. The shooting was caught by several bystanders, and their videos circulated online widely.

Attackers in California Shooting Had Thousands of Bullets

Los Angeles County Sheriff Jim McDonnell promised the investigation into Robertson’s death would be handled “with the utmost professionalism and integrity” and urged anyone with information to come forward.

“There’s gonna be criticism anytime there’s a deputy-involved shooting. We’ve seen that in the last two years or so, the sentiment across America has been critical,” McDonnell said. That’s why we … try to be as transparent as we can with the information that we can share to say, hey here’s what we have, here’s what we know about it, with the caveat that there’s more investigation to be done.”