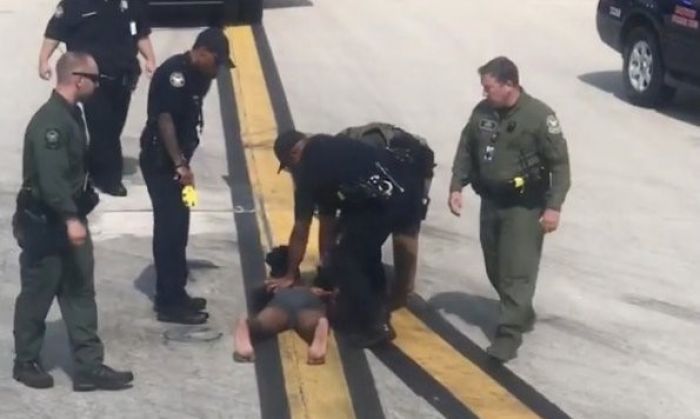 Police arrest a man in underpants on the tarmac at the airport in Atlanta, Georgia, U.S., June 26, 2018 in this picture obtained from social media. (TK JAMES/via Reuters)
Crime and Incidents

A man scaled a fence at Atlanta’s airport on June 26, jumped onto the wing of a stationary airliner and pounded on the plane’s windows before being arrested, police said.

Videos posted online by passengers inside the airliner showed a barefooted man dressed only in his underpants apparently talking to himself and walking near the plane.

The pilot could be heard on one of the videos telling passengers the man had left the plane and was trying to get back on board. The pilot later said the man had not been a passenger.

“He approached an aircraft, jumped on the wing and began to pound on the windows. Five minutes later, he was taken into custody without incident,” Stephanie Brown, a spokeswoman for the Atlanta Police Department, said in a statement.

The man was identified as Jhryin Jones, 19, who was charged with criminal trespassing, public indecency, and obstruction of law enforcement officers, Brown said.

A passenger told WXIA-TV that the man approached a Delta airliner that had arrived from Miami. The news station said passengers held an emergency door shut to keep the man from getting inside the plane.

Officials of the Hartsfield-Jackson International Airport, the world’s busiest, said on Twitter that the incident had no impact on airport operations.

Calls and emails to airport officials on Tuesday evening were not immediately returned.