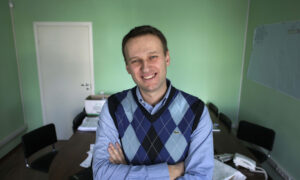 A NSW policeman wearing a face mask at a 'pop-up' clinic in Albury, Australia on July 7, 2020. (David Gray/Getty Images)
Australia

A man will face court accused of assaulting a nurse and a security guard at a hospital in Sydney’s west.

Police have been told a man was receiving treatment at Westmead Hospital about 5 a.m. on Sept. 11 when he punched the 40-year-old security guard in the face and arm.

He then approached the nurse’s station and allegedly punched the 31-year-old nurse in the back of the head before grabbing and shoving her, causing her to fall and strike her head on a door.

The nurse suffered a head injury and was treated before being transferred to a nearby hospital for further treatment.

The security guard suffered minor injuries and was treated on scene.

The 26-year-old man was restrained before being sedated by hospital staff.

Upon being discharged on Saturday morning, he was arrested and charged with common assault, assault occasioning actual bodily harm and reckless wounding.

He has been refused bail to appear in Parramatta Bail Court on Sept. 13.