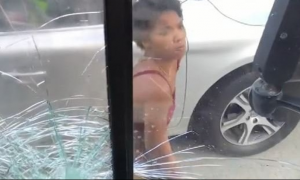 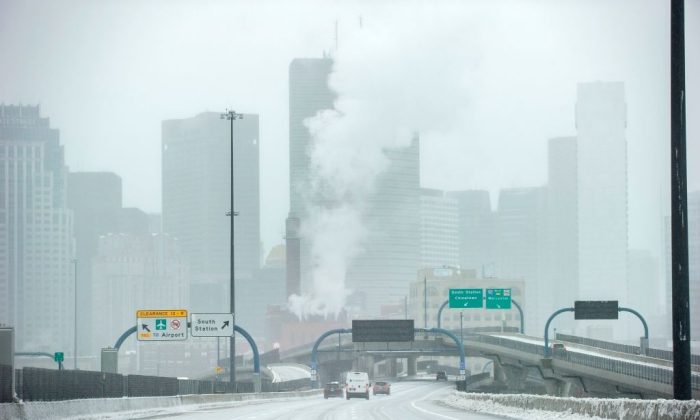 Ice and snow cover Interstate 93 through the city during Winter Storm Harper in Boston, Massachusetts on January 20, 2019. (Joseph Prezioso/AFP/Getty Images)
US News

The Massachusetts Turnpike turned into a rodeo when 65-year-old Richard Kamrowski found his inner cowboy, and mounted the hood of a runaway SUV after a minor accident, holding on for 3 miles, in hopes of taming the angry bull.

It began as a minor sideswipe, and the driver of the SUV, Mark Fitzgerald, 37, wasn’t willing to settle the affair with Kamrowski and drove off, according to Slate. Before he could get away, Kamrowski grabbed him by the horns, and coincidentally, NBC reporter Ray Fuschetti, was there to capture the bull busting on camera.

In the video, you can see Fitzgerald playfully accelerate and decelerate to DMX’s Where the Hood At? endangering Kamrowski’s life.

Witnessed some intense #RoadRage on the #MassPike yesterday to say the least. Since I can’t settle on one of the witty captions I had in mind I’ll let @DMX handle it for me 😂 Welcome home! 🐾 #Boston #GoPats #Leggo! pic.twitter.com/sMWRoHIGlN

“I just kept telling him, ‘Stop the car, stop the car,’ and he wouldn’t stop,” Kamrowski told WCVB. “I thought he was going to run over me.”

After about 3 miles, the SUV was still raging, but Kamrowski had his mind and grip set: he wasn’t getting off. However, this beast could not be tamed, at least not until the driver saw the barrel of a gun. According to WCVB, good Samaritans (resembling bullfighters) also intervened, helping to stop Ferdinand’s contrarian.

As Kamrowski holds on to the hood, the windshield can be seen cracked in the video, but details of the accident are unavailable. Fitzgerald was charged with suspicion of assault with a deadly weapon and leaving the scene of a crash.

But as brave and ambitious as Kamrowski’s decision was, Slate reported that he was also charged for his wild, wild deed: disorderly conduct. At the end of the video, you can see Fitzgerald calmly leaning on the Jersey barrier awaiting his arrest, and the bull at rest.

DEVELOPING: 65 year old man who rode on hood of car in apparent road rage incident on Pike says he was on his way home from work—the three mile ride on hood felt like forever. ⁦@NBC10Boston⁩ ⁦@NECN⁩ pic.twitter.com/AQrGnfnR6L

The Other Highway Cowboy

A similar incident took place on Canada’s Highway 404 in 2018. A dispute between Dave Yeomans and another driver resulted in Yeomans holding onto the hood of a car.

A man was caught clinging to the hood of a vehicle travelling nearly 100 km/h along Highway 404 during an alleged road rage incident Wednesday morning.

Both vehicles tried to merge onto the same lane. When driver Edward Ennis exited his vehicle, he allegedly threw a toolbox toward Yeomans, according to CTV News. Yeoman went to the front of Ennis’s car to take a picture of the license plate, and that’s when street justice met with road rage.

However, Kamrowski topped Yeomans’s near-one-mile long ride. But Yeomans received no penalties, as it wasn’t his decision to mount the car. Both riders brought the drivers to justice, and both said that it could have been worse, for neither of them was hurt.