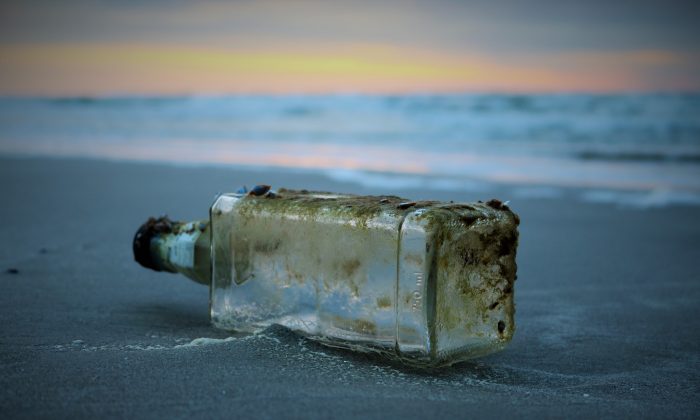 This composed file image shows a bottle with a message. (Pixabay)
US News

A Florida man out for a morning stroll along the beach was shocked to find a message in a bottle, along with a someone’s cremated remains.

John Breland stumbled across the green bottle on May 23 on Destin beach, reported WKRN, 500 miles from where it was put in the ocean in Miami as a family memorialized a loved one.

Inside the bottle, Breland found a bag with a message and a bag of ashes labeled: “Cremated remains of Jacquelene Elizabeth Barineau. 1964-2018.”

The note, which was obtained by WKRN, said: “My time was cut short, so I am traveling the seas to see the world one wave at a time. If you find me please contact my family…. here is some money to for you to help me on my way after you have contacted my family please.”

MESSAGE IN A BOTTLE😢 Mobile man John Breland had a big surprise Thursday morning when he found a message in a bottle on the beach. https://t.co/O5t5EAdl5H

Breland obliged, contacting the Tennessee family, who told him that she had passed away in 2018, and that they had put the bottle in the sea just offshore from Miami in February this year.

“He was so thankful that we found it and he said hey would you guys mind putting it back in a bottle,” Breland said.

“I just got a text from him, saying ‘I would’ve talked more but I couldn’t stop crying,'” said Breland, describing the situation as very emotional.  “We’re going to do the right thing and put the money back in there and then send it back out to sea,” he said.

Last year a couple in Western Australia found the oldest known message in a bottle.

Thinking it would “look good on a bookshelf” Tonya Illman picked up an old-looking gin bottle while walking on sand dunes, only to discover a message inside that was 136 years old.

She said that the note was damp, rolled tightly and wrapped with string.

“We took it home and dried it out, and when we opened it we saw it was a printed form, in German, with very faint German handwriting on it.”

Experts from the Western Australian Museum (pdf) verified that the message and bottle were authentic and jettisoned from a German ship.

Inside the bottle was a roll of paper printed in German, dated June 12, 1886. It’s believed that the bottle and note were washed up within a year but lay preserved under a layer of damp sand.

Read More
Shen Yun’s Messages Inspire CEO to ‘See What Is Going on Within the World’
Dying Mother Left Secret Message for Daughter on Wedding Shoes
Aussie Billionaire Clive Palmer Plans to Ban Political Text Messages If Elected
Children’s Books With Positive Messages for the Holiday Season
Shen Yun, ‘It is a message from the divine’

Anderson consulted with colleagues in the Netherlands and Germany for more information.

“Incredibly, an archival search in Germany found Paula’s original meteorological journal and there was an entry for 12 June 1886 made by the captain, recording a drift bottle having been thrown overboard. The date and the coordinates correspond exactly with those on the bottle message,” he said.

He added that the handwriting from the journal and the message also matched.

The previous world record for the oldest message in a bottle was 108 years.

In 2016, a message in a bottle was returned to the daughter of the man who had penned it—five decades later.

The bottle was found by a Utah man half-buried in the sand while he was vacationing in the Turks and Caicos in the Caribbean, reported WMUR.

The note inside the bottle said, “Return to 419 Ocean Blvd. and receive a reward of $150 from Tina, owner of the Beachcomber.”

New Hampshire woman receives message in a bottle from her father after 50 yearshttps://t.co/K60EKlnHLc pic.twitter.com/0YoshV9C9O

According to AP, the owner of the motel, now deceased had written the note as a joke and thrown it into the Atlantic Ocean in 1960.

The finder of the bottle, Clint Buffington flew to New Hampshire to deliver the message to the man’s daughter. True to her father’s wishes, she gave him the reward money.