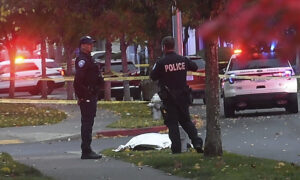 Authorities were on scene at the National Mall in Washington, D.C. where a man—claiming to have dangerous materials—drove his pick-up truck onto the grass.

U.S. Park Police said the man believed he had been exposed to anthrax. Authorities were seen taking the man, wrapped in a blanket, from the area outside the Capitol building near the reflecting pool.

According to a press conference, local police say they swabbed the man for anthrax—which came back negative—and arrested him, moving him to be tested further.

The incident, which acquired the attention of both local police and fire departments, as well as the FBI, occurred around 3 p.m. on May 17.

According to an ABC News affiliate, D.C. Fire officials confirm they have been called to assist police with the situation, and say it might include a mentally unfit subject.

Capitol Police and Park Police were also reported to be on scene. Several streets in the area were closed and hazmat suits were deployed.

Park police spox says suspect believes he was exposed to anthrax. He brought the substance with him. Hence robot. pic.twitter.com/eegea0tfPH

A witness said the man “came out with his hands up,” and kept “waving his hands, talking on the phone.” Then, three police officers, “who appeared to have gas masks on looked like they handcuffed him.”