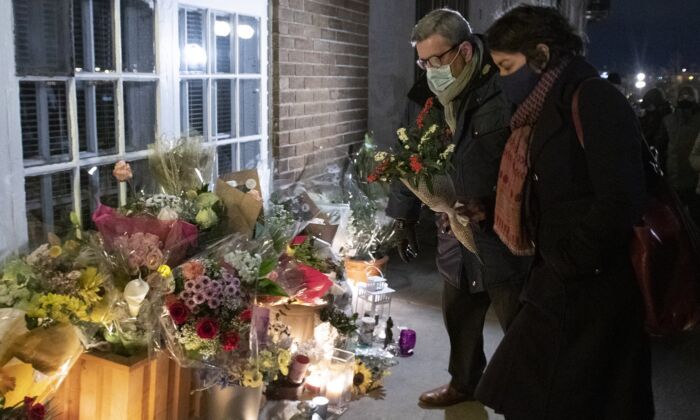 Quebec City mayor Régis Labeaume brings flowers at a vigil to honour Suzanne Clermont, who was stabbed to death on Halloween night by a man with a sword, Nov. 2, 2020 in Quebec City. (The Canadian Press/Jacques Boissinot)
Canada

The man accused in Quebec’s Halloween 2020 stabbing attacks that left two people dead was in a state of psychosis and suffering from delirium, a psychiatrist testifying for the defence said Friday.

Dr. Gilles Chamberland, who assessed Carl Girouard after the killings, said he believes the accused is on the autism spectrum and likely suffers from schizophrenia.

“This psychosis meant that he was unable to know if the actions he was taking were good or bad,” Chamberland concluded in his report.

Girouard, 26, is charged with two counts of first-degree murder in the deaths of François Duchesne, 56, and Suzanne Clermont, 61, on Oct. 31, 2020, and he is also charged with five counts of attempted murder. He admits to killing two and injuring five others but says he is not criminally responsible because he was suffering from a mental disorder at the time of the attacks.

The Crown has argued the acts were premeditated and had been planned since 2014.

Chamberland testified the accused wasn’t hallucinating but suffering from delusions that had developed over time.

The court has heard that Girouard was obsessed with violent video games involving swords and began to confuse reality and the virtual world. He was allegedly deluded about having a mission to kill people with a sword since age 18.

Girouard has testified that his mission was to create chaos, change the world and encourage like-minded people—whom he called his “alter egos”—to continue his objective.

Chamberland said Girouard told him about his mission and that the suspect was convinced that killing people with a sword would show he was courageous.

“If that’s not delirium, I don’t know what is,” said Chamberland, who met Girouard in April and September of last year to assess his criminal responsibility.

The psychiatrist told jurors he consulted the many available documents on the accused, including one psychologist report discussing the issues Girouard had at age 12. The report, Chamberland said, said Girouard had aggressive and impulsive traits. It also said the accused had grandiose ideas and was influenced by video games, conclusions the doctor said were an indicator of what was to come.

“At the age of 12, you already have the embryo of everything that will happen,” Chamberland told the jury.

Chamberland said that report leads him to suspect Girouard is on the autism spectrum and likely suffers from Tourette’s syndrome and schizophrenia.

Around Grade 10, Girouard dropped out of school and increased cannabis use—typical in schizophrenia cases, Chamberland said.

When the pandemic hit in 2020, Girouard quit his job and stayed home playing video games night and day. After the Halloween night sword attack, reality set in again, the doctor said.

Girouard, Chamberland said, had received mental health assistance over the years. He came from a caring family, and his mother, who raised four boys including one brother diagnosed with autism, was devoted but overwhelmed, the doctor added.

“We’re dealing with someone who is very disturbed,” Chamberland said, adding that despite the help the suspect was given, “it did not work and he couldn’t be helped or managed.”

Earlier this week, Girouard testified that there were two versions of himself: one person on the witness stand and a version that was focused on the mission to kill.

Chamberland said he does not believe Girouard suffers from multiple personalities—where one doesn’t know what the other is doing—but rather two versions constantly fighting each other.

He will resume his testimony on Monday.