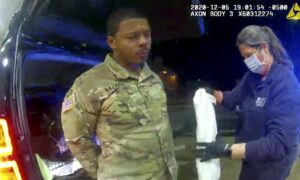 Man Buys Brother a PlayStation, His Body Was Found the Next Day

A New Jersey man left home to buy his little brother a PlayStation 4 but his body was found the next day.

Danny Diaz-Delgado, 20, noticed someone selling a Sony PS4 console on Facebook and on Friday, March 23, so he left his home in Trenton to meet the seller in the city, NJ.com reported.

Diaz-Delgado told his family that he would be back in an hour.

But that never happened.

He was found unresponsive by a passerby on Saturday, March 24, lying face down with his hands tied behind his back and tape wound around his face, ABC7 reported. There were multiple gunshot wounds to his torso, head, and leg according to officials.

According to People, the death was described by authorities as an execution-style killing.

“He was a good person who glowed with the love of God,” mother Olga Diaz told ABC7. “And now he’s dead.”

Unnamed sources told The Trentonian that Diaz-Delgado had been reported missing just hours before his bullet-riddled body was found.

Two weeks ago Diaz-Delgado discovered an online advertisement believed to be from 29-year-old Rufus Thompson, he was selling a used PS4.

Detectives said they found an empty PS4 box in Thompson’s home located at Ardmore Avenue, NJ.com reported. Also found in his home was a roll of pink duct tape and a television with a cut power cord.

According to People, Thompson was arrested on Saturday at a friends house on murder, robbery, weapons, and kidnapping charges.

He is a convicted felon who had already served prison time for a previous 2013 burglary case, the Trentonian reported.

On Monday, April 2, he appeared for a court hearing, NJ.com reported. He answered multiple questions with “Yes.”

Diaz Delgado enjoyed spending time with his family and had hobbies in sports, camping, martial arts, and track and field, according to his obituary. He also protected lives working as a lifeguard.

He is survived by 12 other relatives.