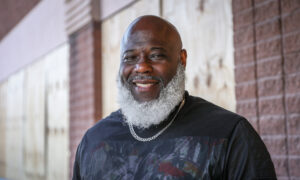 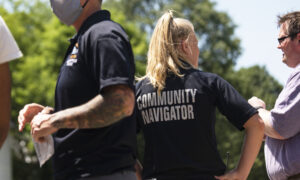 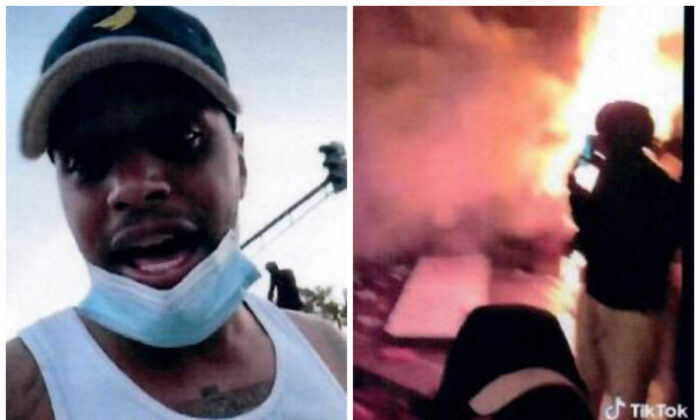 Bryce Michael Williams (L) speaks during a video posted on TikTok on May 28, 2020. (R) A still image from a TikTok video posted on Williams's account shows a man watching as the Minneapolis Police Department's Third Precinct burns. (ATF)
Crime and Incidents

Videos posted on TikTok helped investigators identify a suspect in the torching of the Minneapolis Police Department’s Third Precinct.

The building was burned during riots on May 28 after police officers abandoned it.

A man spotted in surveillance video footage holding a Molotov cocktail was identified as Bryce Michael Williams thanks to videos he posted on TikTok, a platform where users post short video clips.

In one video, Williams, 26, is standing in front of the burning precinct building wearing the same clothing he was wearing when captured in the surveillance footage. A second TikTok video clearly showed his face when he turned the camera around to take a selfie as he stood near the building.

Williams was wearing a baseball cap with a light-colored brim, dark-colored pants, dark shoes, and a distinctive light-blue medical mask.

Other video footage and photographs were reviewed that show the man holding a Molotov cocktail a different man tried lighting, according to a criminal complaint (pdf). Williams was interviewed by an Instagram user on or about June 12 about the rioting in Minneapolis. During the interview, Williams says he was “there when they first burned down the police station.”

The man said he participated in protests during the day before joining the riots at night “’cause I’m with my people.”

“They’re all doing [expletive] and getting teargassed, of course I’m going to riot, too,” he said.

Burning down buildings was part of the rioting, he added later. “That’s what a riot is, it’s mass destruction,” he said.

Information from a TikTok video, including Williams’s profile picture and the listing of his full name, helped lead to his arrest. Investigators found Williams was booked into jail in 2015. At that time, and during subsequent encounters with law enforcement, he gave his phone number.

Investigators obtained a search warrant and found, using GPS location data, that the phone was near the police precinct during the time it was burned.

Williams was charged with conspiracy to commit arson.