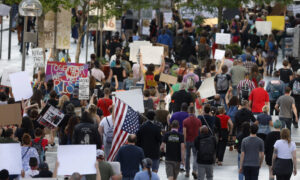 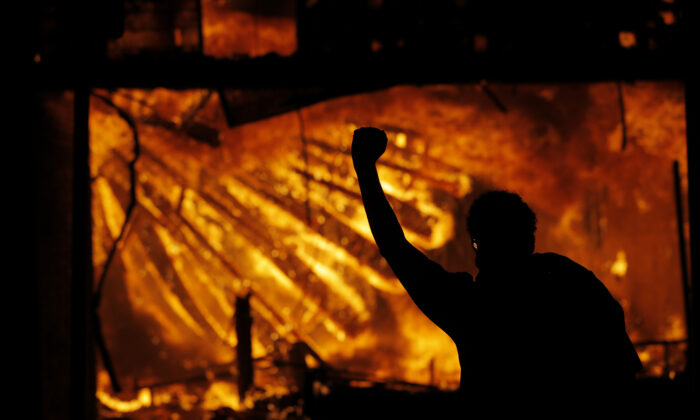 A protester gestures in front of the burning 3rd Precinct building of the Minneapolis Police Department in Minneapolis, Minn. on May 28, 2020. (Julio Cortez/ AP Photo)
US News

After numerous discussions over the phone between Frey and Police Chief Medaria Arradondo, the mayor said he made the decision to evacuate the precinct.

“The symbolism of a building cannot outweigh the importance of life, of our officers, or the public. We could not risk serious injury to anyone,” he said.

“The resources that we will offer to the people of the 3rd precinct will continue, period,” he added later. “The building is just bricks and mortar. It’s a building.”

Video footage showed police officers driving away from the building around 10 p.m. in vehicles with lights blaring as rioters hit the cars. The first vehicle pushed through the outside gate, which was shut by protesters.

After the building was abandoned, rioters flooded inside, setting fires and destroying equipment. All areas for three blocks around the precinct are closed until further notice, Minneapolis police said Friday morning, citing “public safety reasons.”

Phone calls to department press officers went unanswered Friday. A phone call made to the 3rd precinct went to a voicemail that said no one was available to take the call.

A police spokesman told a wire agency late Thursday that officers evacuated “in the interest of the safety of our personnel.”

Rioters and protesters came out in masse starting Tuesday after video footage circulated showing Minneapolis officer Derek Chauvin pressing his knee against the neck of George Floyd, a city resident.

Floyd, who complains he cannot breathe, ultimately died. Four officers involved with the situation were fired but none have been charged as of yet.

Frey earlier in the week called for the arrest of Chauvin, arguing that most people who committed such an act would “already be behind bars.”

Frey said he fully supports Arradondo and Minneapolis Fire Chief John Fruetel. Firefighters fought various fires overnight but not the ones at the 3rd precinct.

National Guard troops were focusing on ensuring fire departments are able to respond to calls, the Minnesota National Guard said in a statement.

Police officials remained silent on public-facing platforms Thursday night apart from a tweet spreading a message from the city of Minneapolis.

“We’re hearing unconfirmed reports that gas lines to the Third Precinct have been cut and other explosive materials are in the building. If you are near the building, for your safety, PLEASE RETREAT in the event the building explodes,” the city said.

“We are doing absolutely everything that we can to keep the peace,” Frey said. “This is one of the most difficult situations that our city has been through.”