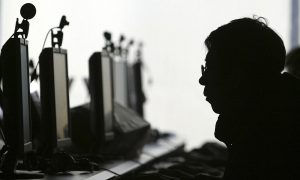 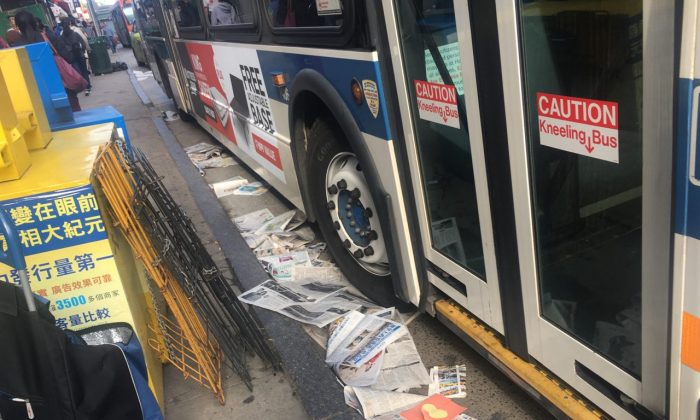 Newspaper copies of the Chinese-language edition of The Epoch Times, scattered on the ground after an apparent attempt to sabotage the publication's newspaper boxes, on May 11, 2019. (Courtesy of Sun Tong)
Crime and Incidents

A man was arrested and charged by New York City police on May 11 after threatening and harassing a Chinese woman who tried to protect a newspaper box belonging to the Chinese-language edition of The Epoch Times.

The Chinese-language edition is the largest-circulating newspaper among overseas Chinese communities.

In New York City neighborhoods with a large Chinese immigrant population, such as Flushing and Chinatown, newspaper boxes with free copies of the Chinese-language Epoch Times can be found on most street corners and major thoroughfares.

Recently, locals in these Chinese communities have reported frequent incidents of deliberate tampering with the newspaper boxes, including many copies of the paper being taken out within a short period of time; copies being littered all over the ground; boxes being pushed over; or hate materials attacking The Epoch Times being placed in the boxes.

On May 11, a 51-year-old Chinese woman named Sun Tong noticed that many copies of the Chinese-language language Epoch Times were scattered on the ground near a newspaper box that sat by the entrance to the Main Street subway station in the Flushing neighborhood of Queens. She picked up the copies and placed them back into the box.

“When I finished loading the papers and was about to leave, a man suddenly dashed over toward me, yelling loudly. He opened the newspaper box again, threw out some newspapers, and kept yelling all the time,” Sun recalled, in a recent interview with the Chinese-language Epoch Times.

Sun tried to stop the man, who appeared to be Hispanic, using the simple English phrases she knew, such as “No, stop.” The man kept yelling in an attempt to intimidate her, Sun said. Seeing that Sun was not scared and did not leave, he took out a knife and pointed it at her.

Sun yelled “No, stop” again and pulled out her cell phone to take a photo of the man. The man put the knife back in his pocket, but then picked up a small shopping cart Sun had brought with her and tried to slam her with it.

Sun quickly stepped back to avoid being hit. The man then left and headed toward the subway station. The whole incident unfolded within 10 minutes, Sun recalled.

Two female passersby noticed the conflict and videotaped it. They then called the police.

About 10 police officers arrived at the scene, according to Sun. The two young ladies showed the video to the officers, who then went into the subway station, located the man, and took him into custody.

Police later charged Manny Meighan with menacing in the third degree, criminal possession of a weapon in the fourth degree, and harassment in the second degree.

As the Chinese-language Epoch Times continues to cover issues such as the U.S.–China trade dispute truthfully—and thus differently from the Chinese Communist Party’s propaganda apparatus—Huang surmises that it’s likely more such incidents will occur.

Huang added that the Chinese-language Epoch Times condemns this kind of behavior and will take legal action to protect the newspaper’s operations and legal rights as it seeks to fulfill its mission as an independent voice for the Chinese people.