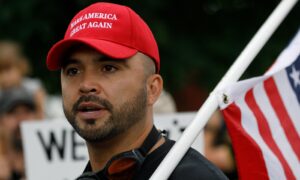 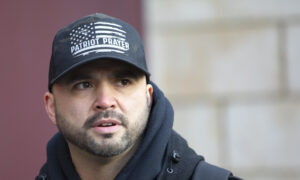 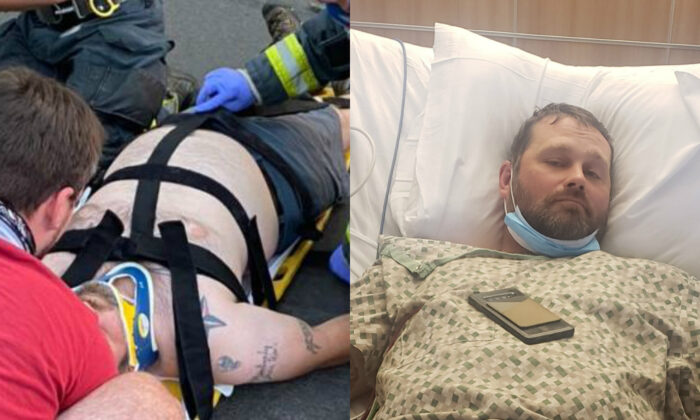 (L) Shane Moon lies on the ground after being struck by a vehicle in Vancouver, Wash., on Sept. 5, 2020. (R) Moon in the hospital recovering. (Shane was involved in a hit and run/GiveSendGo)
Crime and Incidents

A man was arrested for allegedly striking another man on purpose with his vehicle following a memorial for a slain President Donald Trump supporter in Washington state on Saturday.

Charles R. Holliday-Smith, 30, turned himself in to the Vancouver Police Department late Monday and was booked for assault and felony hit and run.

No mugshot was available as of Tuesday.

Holliday-Smith is accused of ramming Shane Moon, a member of the men’s fraternity group Proud Boys, with his truck outside a bar around 7 p.m., shortly after a memorial for Aaron “Jay” Danielson, the Trump supporter who was shot dead in Portland last month.

According to the original police statement, Moon and his friends were inside the bar when another man began filming them. The parties got into a verbal altercation.

“The suspect later left the bar and the victim and several friends also went outside. As the suspect was leaving the parking lot, he hit the victim with his vehicle and fled the area,” police said in a statement.

In an update, police said there was actually no verbal altercation inside the bar and that the suspect stopped filming and exited the bar when security staff approached him.

Moon and his friends went outside and then the suspect hit Moon, police said.

According to a GiveSendGo fundraising page, Moon “was hit by a truck in the parking lot of a bar in Vancouver after leaving a celebration of life of a friend.”

“The truck then fled the scene leaving Shane unconscious and bleeding from his ears on the ground,” it stated.

Moon is still in the hospital.

A Proud Boys leader told the crowd at Danielson’s memorial that Moon “was in a parking lot and he was deliberately ran over.”

“It was a deliberate attack by a known Antifa member,” the leader said, claiming the suspect is also a supporter of the Black Lives Matter movement.

Rex Fergus, who witnessed what happened, told the Gateway Pundit website that the suspect was walking around the bar and recording people inside, allegedly for the purpose of doxxing them, or revealing personal details to the public.

Security ultimately removed him from the bar.

“Once the guy started his vehicle up and started to drive off, he hit Shane,” Fergus said. “Shane tried to get out of the way and the guy ran him over.”

Danielson was shot dead in Portland on Aug. 29. Authorities identified the shooting suspect as Michael Forest Reinoehl, a member of Antifa, the far-left, anarcho-communist group.

Reinoehl was killed by law enforcement officers during an attempt to apprehend him in Washington state last week.

The Proud Boys is an all-male fraternity group that has brawled with members of Antifa in the past. Multiple Proud Boys received jail time after a fight between the groups in New York City last year.