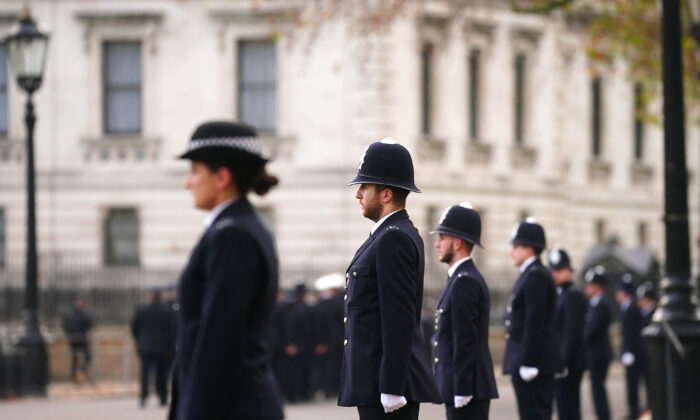 Police officers line up ahead of a memorial service to remember and celebrate the life of Metropolitan Police Sergeant Matt Ratana at The Royal Military Chapel in Westminster, London, on Nov. 29, 2021. (PA Media)
UK

A man accused of murdering Sergeant Matt Ratana at a custody centre in south London in 2020 could face a “fitness to plea” hearing in hospital.

DeZoysa, who was severely injured in the incident, remains in hospital and there is a disagreement between the prosecution and defence teams about whether he is fit to face a trial.

DeZoysa has been charged with murder and nine other charges.

Fitness to plea hearings are held when there is a doubt about a defendant’s ability to follow proceedings, either due to their mental health or due to a physical impairment such as a brain injury.

Last year he was charged, in his hospital bed, with all ten counts and on Friday Judge Mark Lucraft QC heard from prosecutor Duncan Penny, QC, and defence lawyer Imran Khan, QC, about possible locations for the fitness to plea hearing.

The hearing at the Old Bailey heard the hearing may be held in the hospital where DeZoysa is being held, or alternatively in nearby Northampton Crown Court.

Ratana’s funeral took place in Sussex in November 2020 and a wreath from Home Secretary Priti Patel and an All Blacks rugby shirt were delivered before he was privately cremated.

A tribute from his partner Su Bushby was read out, by a friend, in which she said: “Matt made the most of every minute of his precious 54 years. In any situation or room he walked into, his presence would always be felt. Like a big ball of energy.

“My life has been richer and funnier for knowing you and I feel blessed you were in my life,” she added.

A memorial service for Ratana, who was born in New Zealand, was held last year and was attended by the Mayor of London, Sadiq Khan, and the then Commissioner of the Metropolitan Police, Cressida Dick.