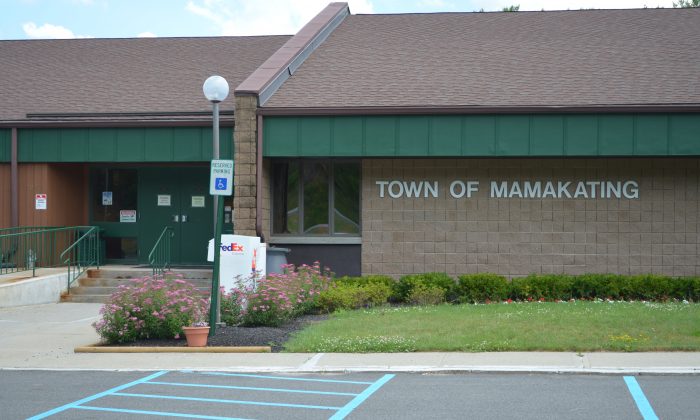 Entrance to government offices of the Town of Mamakating on July 7, 2016. (Yvonne Marcotte/Epoch Times)
New York

Consultants give findings from community input meeting
By Yvonne Marcotte

The public input meeting, which took place on June 9, was to gauge the strengths, weaknesses, opportunities, and threats (SWOT) of the plan and gather public and stakeholder sentiment regarding existing conditions in the town.

This was part of the Turner Miller Group’s process as they update the plan, the first step being to collect “background data, views and opinions from community residents and stakeholders,” according to a report outlining the raw results of the meeting.

Ryan presented the committee with a draft vision statement (Part II) for the comprehensive plan, and goals and objectives as part of future actions (Part III).

Turner reported that 40 members of the public and local media attended the June 9 meeting to give feedback.

The top five strengths of the town, according to the participants, Ryan said, were its rural character, low density housing, the Basha Kill and eco-tourism, the natural environment, the Wurtsboro Airport, and water resources.

Ryan said they tried to consider the needs of the “outside community” as well, referring to people who lived outside Mamakating, such as tourists.

Participants listed eco-tourism and use of the county airport as opportunities for economic growth in the town.

High taxes in the state and a disconnect between the town and its municipalities were cited the most as weaknesses. Participants listed eco-tourism and use of the county airport as opportunities for economic growth in the town.

The most prominent threat to the town was seen as high-density housing on the horizon and “unscrupulous and exploitative developers,”the report on the meeting’s results says.  Brain-drain and lack of job opportunities were among the top-ten threats, it said.

Based on the public input received at the June 9 meeting, the consultants drafted a vision statement for the comprehensive plan.

Now we want to put more emphasis on eco-tourism and the role of natural resources in the town
— Matt Ryan, Principal Planner, Turner Miller Group

The 2001 plan had a “really heavy emphasis” on economic development, Ryan said. Then the recession hit in 2008 and now they want to put more emphasis on eco-tourism and the role of natural resources in the town.  “That’s what really defines and characterizes the town,” he said.

The vision is that by 2030, the town will be a “balanced community which provides economic development opportunities diverse in land use and diverse in population.”

The statement indicated four focal points: the Town of Wurtsboro center, the Village of Bloomingburg center,  hamlet of Phillipsport center and the hamlet of Summitville center.

Weil suggested that the Basha Kill wetlands be lumped with the D&H Canal and Long Path as part of the town’s push for eco-tourism.

The focal points of the new plan are mixed-use centers with residences, specialty shops, and an emphasis on pedestrian and cyclist traffic.

Housing is envisioned as single-family and owner-occupied. Economic development and growth will come from attention and care of the natural environment, with special care for “sensitive areas and open space resources,” the draft plan states.

Ryan said the consultants developed eight goals to achieve before 2030. Some were unchanged from the 2001 plan, which he said were already very strong, and others were added or extensively edited from the former town plan.

Land use and environmental protection was one of them, which encourages continuation of the town’s rural character and protection of the Shawangunk Ridge and Basha Kill eco-systems.

Another, economic development means more ratables, or businesses that contribute to but don’t siphon from the tax base. Eco-tourism was an added section to this goal.

Most infrastructure and transportation objectives stayed the same as the 2001 plan, with an emphasis on preserving the water supply system. An addition was made for expanded “pedestrian and non-motorized trails throughout the town.”

An added objective was to enhance the town’s parkland. Town Supervisor Bill Herrmann, who is on the committee, showed a rough sketch of land donated to expand the town’s public park area. “We’ve just doubled the size of parkland,” Herrmann said.

The Open Space Institute gave the town 53 acres with the provision that the town make the parcel protected park land.

The Open Space Institute gave the town 53 acres with the provision that it  protect it as parkland. Herrmann said the gift represents 12 miles of interconnecting trails.

The committee discussed the final goal around community design reinforcing the town’s rural character. An added objective to this goal was “design guidelines for the villages and hamlets that ensure new development is designed consistent with the historic qualities and existing pattern of the village and hamlet-built environment.”

The town is embroiled in a prolonged controversy with developer Shalom Lamm whose Chestnut Ridge housing development lies in the Village of Bloomingburg. An update to the comprehensive plan is not related to the legal wrangling with Lamm, according to Weil, but results of the June 9 public meeting indicated concerns about it.

The 396-unit Chestnut Ridge development is considered high density housing, which is significant because at a population of 420, according to the 2010 U.S. census, it is the smallest village in the state.

In the SWOT analysis, the threat of high-density housing was cited as one of the highest concerns, a possible reference to the Chestnut Ridge development.

The development now covers 198 acres, but developers have already purchased 500 acres of adjacent property for future construction, according to the Times Herald-Record.