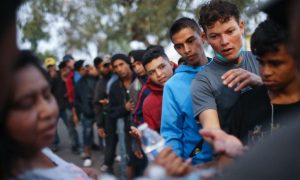 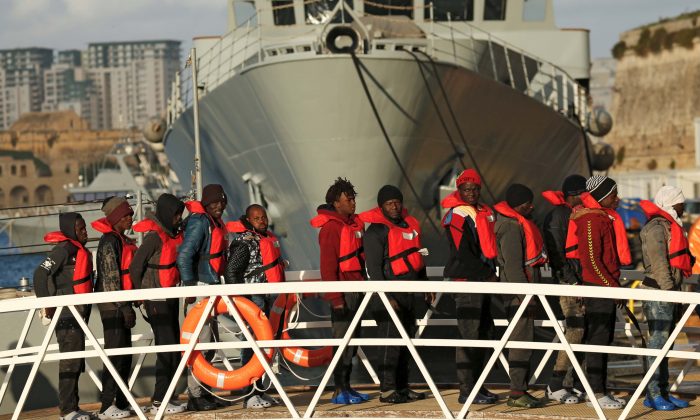 Migrants who were stranded on the NGO migrant rescue ships Sea-Watch 3 and Professor Albrecht Penck disembark from an Armed Forces of Malta patrol boat at its base in Marsamxett Harbour, Valletta, Malta, on Jan. 9, 2019. (Reuters/Darrin Zammit Lupi)
Europe

VALLETTA, Malta—Forty-nine migrants disembarked in Malta on Jan. 9 after spending more than two weeks stranded aboard rescue ships, ending a standoff in which European Union countries had refused to offer them a safe port.

The agreement that ended the stalemate was brokered by the European Commission, and it calls for a total of some 300 migrants who have reached Malta in recent weeks to be redistributed between eight EU countries, including Italy.

But Italian Interior Minister Matteo Salvini, during a visit to Poland, has demanded a “clarification” within the government since the agreement was announced, a League source said, and he will meet with Prime Minister Giuseppe Conte and other ministers upon his return later on Jan. 9.

“I am and remain absolutely against any new arrivals in Italy,” Salvini said on Twitter. “Caving to the pressures and threats of Europe and the non-governmental organizations is a sign of weakness that Italians don’t deserve.”

The Sea-Watch 3, a vessel run by a German humanitarian group, plucked 32 people from an unsafe boat off the coast of Libya on Dec. 22. Another German charity, Sea-Eye, rescued 17 others on Dec. 29.

They had both been sailing back in forth in Maltese waters for days after Italy, Malta, and all other EU countries refused to offer them a port of safety.

Italy allowed rescue ships to dock regularly until June of last year when the new populist government took over and Salvini, who is also leader of the anti-immigration League party, closed the country’s ports to humanitarian vessels.

Since then, the EU executive often has had to conduct lengthy negotiations with member states in order to share out new arrivals before the rescue ships are allowed to dock.

But on Jan. 9, Salvini said the deals made in the past are not being respected. EU partners said they would welcome 270 migrants after Italy agreed to allow them to disembark in Sicily in July, but only 129 had actually been taken in, he said.