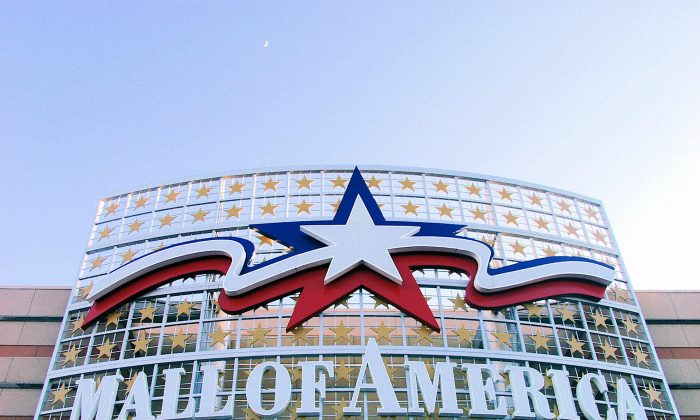 A sign at the Mall of America, the largest in the United States, is seen in a 2006 file photo. (Tim Gans/AFP/Getty Images)
Crime and Incidents

A lockdown that was initiated in the Mall of America in Bloomington, Minnesota, on Thursday after shots were fired has now been lifted, officials confirmed.

The shooting, which police called an “isolated dispute,” appeared to have started following a conflict between two groups at the cash registers inside the Nike store. One of the groups left but then returned and the conflict ended with one person pulling a gun and firing shots, police said.

“Instead of walking away [from the conflict], they decided to demonstrate a complete lack of respect for human life,” Hodges said. “They decided to fire multiple rounds into a store with people.”

It appears that no one was injured during the shooting, officials said.

The two individuals involved in the shooting then fled to a different location on foot, police said, and law enforcement officials responded to that location at Best Western hotel on Killebrew Drive, on the south side of the mall but the search did not result in any arrests.

“We did not locate them there at this time,” Hodges said before urging the suspects to turn themselves in to police and stating that officials “will not stop” until the suspects are tracked down and apprehended.

Hodges also noted that the shooting is an “isolated incident” and that officials do not believe there is a danger to the public at this time. Witnesses of the shooting are being encouraged to contact the police with information.

Police are still searching for the suspects involved in the case, Hodges said but did not provide details or a description of the suspects.

Hodges added that one of his officers was close to the mall when the shots were fired and crews arrived on the scene within 30 seconds.

“If someone decides that they don’t value human life, and they choose to pull out a weapon, I don’t know what we can do,” the chief said. “We train for this, we do this … but if an individual decides they have no regard for human life, I don’t know any defense for that.”

The Mall of America had posted on Twitter at approximately 6 p.m. that a lockdown had been initiated due to a “confirmed isolated incident in a tenant space” and encouraged customers to “remain in the closest secure location until the lockdown has been lifted.”

In an updated tweet at 7:28 p.m., Mall of America said the lockdown was being lifted but that the mall would remain closed for the rest of the evening. It added that the shooting was an “isolated dispute between the suspects and there is no longer a threat.”

Video footage on social media shows shoppers racing to flee the mall. In a further video taken outside of the Nike store, shots can be heard being fired.

Mall of America spokesperson Dan Jasper said the mall will re-open on Friday but customers will see an increased presence of security and police to keep shoppers safe.

Minnesota Gov. Tim Walz said in a statement, “tonight’s violence at the Mall of America is unacceptable. These brazen incidents will not be tolerated.”

He added that “state resources are on the scene, we have offered our full support, and we will stay in close contact with Bloomington police to apprehend those responsible” and that “we are committed to maintaining an unprecedented state law enforcement presence in the Twin Cities until we put a stop to this rise in crime.”