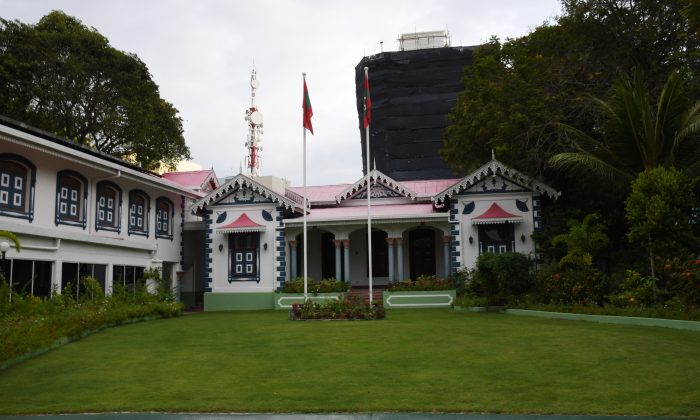 A general view of the Mulee-aage, the official residence of the President of the Maldives, in Male on Feb. 7, 2018. (STR/AFP/Getty Images)
China Business & Economy

MALE—The Maldives’ new government will pull out of a free trade agreement (FTA) with China because it was a mistake for the tiny nation to strike such a pact with the world’s second biggest economy, the head of the largest party in the ruling alliance said.

It is the latest sign of a backlash against China in the Maldives, best-known for its luxury resorts on palm-fringed coral islands.

“The trade imbalance between China and the Maldives is so huge that nobody would think of an FTA between such parties,” said Mohamed Nasheed, the chief of the Maldivian Democratic Party, which leads the ruling federal alliance. “China is not buying anything from us. It is a one-way treaty.”

On Nov. 17, as he took office, President Ibrahim Mohamed Solih declared the state coffers have been “looted” and warned that the country was in financial difficulty after racking up debt with Chinese lenders.

Former President Abdullah Yameen, who lost the election in September, signed the FTA during a visit to Beijing in December 2017, and the same month his parliament ratified the treaty despite opposition protests that he had rushed through the 1,000-page document in less than an hour without any debate.

Nasheed, a former president and now an advisor to Solih, said parliament would not pass the law changes required for the zero tariffs agreement to come into force.

“It was ratified by parliament, but fortunately it calls for different sets of legislation. We are not going to have this further legislation. We can’t go with that,” Nasheed told Reuters in an interview in the capital Male.

The Maldives is among a number of small countries where China has invested billions of dollars building highways and housing as part of its One Belt, One Road (OBOR, also known as Belt and Road) initiative. Through that initiative, Beijing hopes to establish geopolitical influence through trade and investment flows with much of Asia and parts of the rest of the world.

Critics in the Maldives say a China-led infrastructure boom has left the tiny country of a little more than 400,000 people debt-ridden, and a free trade pact would only make the situation worse given the lopsided nature of the relationship.

Between January to August this year, the Maldives’ imports from China were $342 million, while its exports to China were just $265,270, according to Maldives customs data. The island nation bought meat, agricultural produce, flowers, plants, electronics, and toys from China among many other items.

It imported $194 million worth of goods from India, its traditional partner, during the same period, while exporting $1.8 million of products including scrap metal such as copper, aluminum, and steel.

The Yameen administration said at the time that the FTA with China would help diversify the $3.9 billion economy and boost fisheries exports from the Maldives, crucial since the European Union declined in 2014 to renew a tax concession on them.

The two countries would open up services such as finance, healthcare, and tourism, China said at the time. The Maldives has no free trade pacts with any other country.

If the Maldives turns away, it would be the latest setback for China, which is facing opposition for its projects in countries stretching from Malaysia to Nepal, and even from its all-weather ally Pakistan.

A proposed free trade agreement has been held up in Sri Lanka over Colombo’s demand that it have the option to leave after 10 years.

A member of Solih’s transition team also said the administration was thinking of cancelling the pact.

“It makes no business sense,” the official said, requesting anonymity because of the sensitivity of the matter. “This is not something we are going to pursue, we expect the cabinet to meet and take a formal decision on this.”