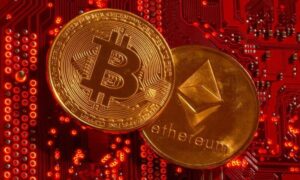 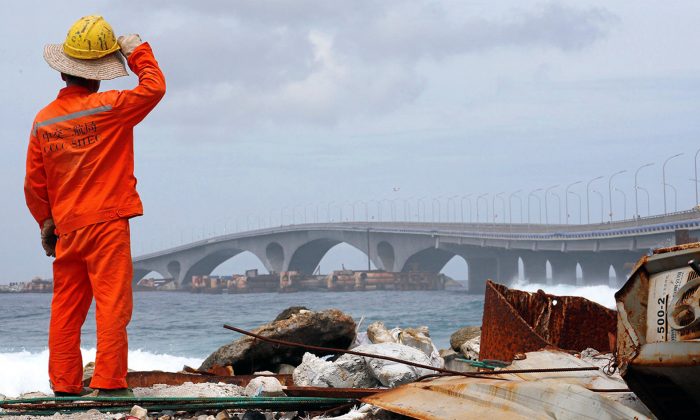 A construction worker looks on as the China-funded Sinamale bridge is seen in Male, Maldives on September 18, 2018. (Ashwa Faheem/Reuters)
China Business & Economy

NEW DELHI—A victory for President Abdulla Yameen in a Sept. 16 election in the Maldives could ramp up pressure on its finances, as the government stays the course on a Chinese-backed infrastructure boom that is in danger of swamping the economy.

The Maldives under Yameen has grown closer to China—to the alarm of traditional ally India—with China funding roads, bridges, and an extension to the international airport as part of its One Belt, One Road (OBOR) initiative of infrastructure projects in almost 70 countries from Mongolia to Montenegro.

But a Chinese takeover of a port in neighboring Sri Lanka and problems in several other countries have led to fears that the initiative is a debt trap to hook countries into China’s sphere.

Yameen is seeking a second five-year term in the Indian Ocean archipelago known for its sun-kissed tourist beaches and diving.

His main rivals have been jailed on charges ranging from terrorism to attempting to topple the government, leading to doubts abroad about the legitimacy of the vote.

The Maldives, a small economy heavily reliant on tourism, is one of the most at-risk countries of any involved with OBOR to the distress of debt, said the Center for Global Development, a Washington D.C.-based think tank tracking the initiative.

The center, using publicly available information, estimates China’s loans to the Maldives at $1.3 billion, more than a quarter of its annual gross domestic product.

An exiled former prime minister, Mohamed Nasheed, who wants to renegotiate the deals with China, told Reuters in June the loans could be more than $2.5 billion, without citing his source.

Scott Morris of the Center for Global Development said China’s loans gave it a dominant role.

“That raises concerns to have such a dominant role being played by another government,” Morris told Reuters.

“You have to think about what happens in a case of distress—who calls the shots in that situation. China is not bound by the kinds of standards that other major creditors are.”

The two ratings agencies covering the country, Fitch and Moody’s, both rate the Maldives as sub-investment grade, and the World Bank and the International Monetary Fund see a high likelihood of distress if current spending continues.

Moody’s cut its outlook to “negative” in July, citing the boom in infrastructure spending as a cause for concern.

“They have a massive infrastructure program and, as part of that, they have been raising debt,” Anushka Shah from Moody’s told Reuters.

“There has been a big increase in debt since the infrastructure projects started.”

Fitch also cautioned over rising debt in its last update on the country in May.

The Maldives’ economy has grown by an average of 6 percent a year for the last five years, buoyed by tourism and construction, according to Fitch.

But both ratings agencies urged investors to be cautious in February after the Supreme Court freed political prisoners, against the wishes of Yameen, sparking a political crisis and leading several countries including China and the United States, to warn their citizens against travel there.

“We take into account fairly elevated political risk in our rating,” said Shah.

“Political tensions affect policy and could also have some spill-over into the tourism sector.”

The political tension had little impact on visitor numbers, the government said, reporting that arrivals rose more than 10 percent year-on-year in the first seven months of 2018—though visits from China, its biggest market, fell by more than 8 percent.

The infrastructure boom is effectively a “bet” on being able to grow these numbers, said Morris.

“But in the meantime, they have to be able to service that debt as it comes due,” he said.