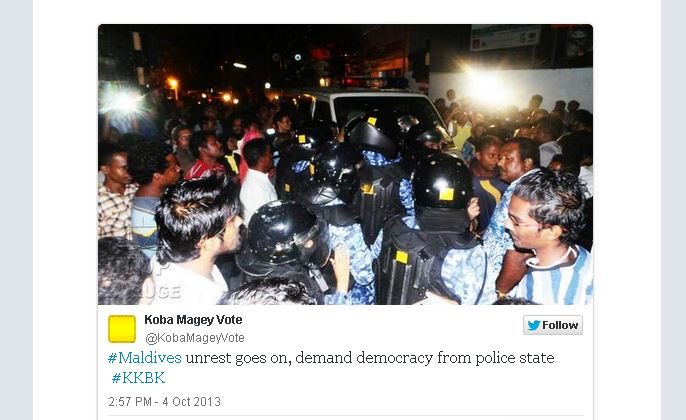 Arrests are happening the Maldives during protests over the presidential election run-off. (Screenshot/Storify)
Asia & Pacific

Maldives: Arrests Made in Malé as Soldiers and Tanks Face Protesters

Arrests were made in the Maldives on Friday amid protests over the presidential run-off election.

Tanks and soldiers were dispersed on Thursday, but the conflict appears to have intensified in the past day.

The protesters are calling for a date for the presidential run-off. The country’s Supreme Court ordered the run-off–originally scheduled for Sept. 28–to be postponed.

The court made the decision during the night in a special session and told security forces to act against anyone who doesn’t obey orders, reported Reuters after the postponement.

“The Supreme Court has ordered security services to prevent any effort to hold the election tomorrow. This is why we are not able to hold the run-off election within the constitutional deadline of 21 days,” the country’s election commission said in a statement.

“Therefore voting will not take place on September 28, as the environment is not conducive to a free, fair and democratic election,” the statement said.

Former President Mohamed Nasheed earned 45.45 percent of the vote in the first round, short of the 50 percent needed for outright victory.

He was going to face Abdulla Yameen, who came in second.

The county said at the United Nations on Oct.1 that its Supreme Court is expected to rule in the coming days on a petition that has held up a second round of voting in its contentious presidential election.

Acting foreign minister, Mariyam Shakeela, told the U.N. General Assembly Tuesday that the integrity of the second round can’t be maintained without ensuring the first round was fair.

Shakeela said the election process can continue after the court’s verdict, allowing a new president to be sworn in Nov. 11.

The U.N. and Western nations had all praised the conduct of the first round.

The front-runner, Nasheed, in that vote accused the court of colluding with Maldives’ former autocratic ruler to deny him victory.

Maldives held its first multi-party election in 2008 but has faced political turmoil in the past year.

[View the story “Arrests in Maldives Over Protests” on Storify]