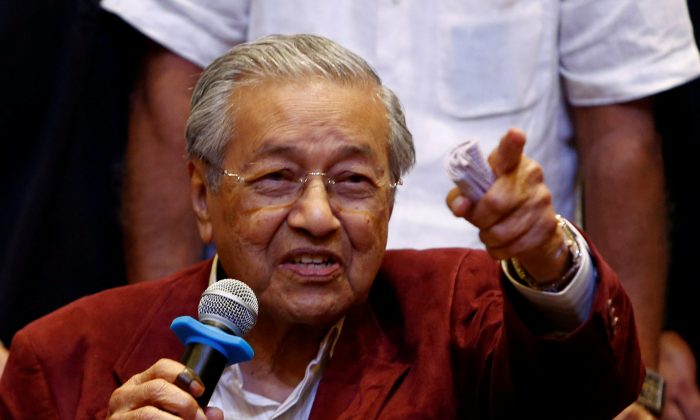 KUALA LUMPUR–Malaysian Prime Minister Mahathir Mohamad barred his predecessor, Najib Razak, from going overseas on Saturday, saying there was enough evidence to investigate his links to a multi-billion-dollar scandal.

Immigration authorities issued a travel ban on Najib and his wife Rosmah Mansor just minutes after the ousted prime minister said they were leaving on a weeklong trip overseas to rest after his thumping electoral defeat.

“It is true that I prevented Najib from leaving the country,” Mahathir said at a news conference, adding that doing so had averted extradition problems later.

“There is sufficient evidence that an investigation into certain things … done by the former prime minister has to be done and, if necessary, the rule of law will apply,” he said.

During a day of fast-moving events, Mahathir also named his first few cabinet ministers, including Lim Guan Eng, a former banker and qualified chartered accountant, as finance minister. Lim is the chief minister of Penang state, but is largely unknown in international financial circles.

It is also only the second time since Malaysia became independent six decades ago that the post has gone to a member of the ethnic Chinese minority.

Mahathir also named a defence minister and a home or interior minister, but said other appointments would be made later. Mahathir and Deputy Prime Minister Wan Azizah Wan Ismail, the wife of his jailed ally Anwar Ibrahim, make up the rest of the cabinet.

Zeti Akhthar Aziz, who was internationally lauded during a 16-year stint as central bank governor, and billionaire tycoon Robert Kuok were among those named to a special team that will advise the government on economic and financial matters for the next 100 days.

Mahathir has been prime minister of the Muslim Malay-majority nation earlier, for 22 years, governing in a tough, direct style.

He said attorney general Apandi Ali who had cleared Najib of wrongdoing in the graft scandal at state fund 1Malaysia Development Berhad (1MDB), had been sacked. Ali declined to comment.

As Najib came under increased pressure, the world seemed to be opening up for Anwar, who, from jail and a hospital bed, combined with Mahathir to hand out the defeat to the administration alliance.

Mahathir has said the king has indicated to him that a royal pardon for Anwar would be announced soon.

Anwar’s daughter Nurul Izzah told Reuters her father was likely to be freed on Tuesday.

Late on Saturday, Mahathir met Anwar in his hospital room, where he is recovering from a shoulder operation. There was no word on what was discussed in the first meeting between the two since their alliance won the election.

After the ban on his travel was announced, Najib said in a Twitter message that he would respect the decision and would remain in the country.

Questions about his whereabouts were answered when he appeared at a meeting of his United Malays National Organisation (UMNO) to announce that he was stepping down as the party’s president and as chairman of the Barisan Nasional, the alliance dominated by UMNO that has ruled Malaysia for six decades.

Earlier, dozens of people – mostly journalists – gathered at an airport near Kuala Lumpur from where Najib and his wife were reported to be leaving for the Indonesian capital, Jakarta, and tried to look into cars entering the complex.

“I’m here to catch the thief,” said a man in the crowd, as riot police stood on guard. There was no sign that Najib or Rosmah had come to the airport.

Reports had widely circulated on social media and local media that the couple were named on the flight manifest of a private jet scheduled to depart for Jakarta at 10:00 a.m. local time.

But police later said there was no flight due to leave the Sultan Abdul Aziz Shah Airport with Najib or his wife.

Najib lost the election at least partly because of popular disgust over the 1MDB scandal.

News broke in 2015 that about $700 million allegedly stolen from 1MDB had made its way into his personal bank accounts.

He denied any wrongdoing, even as U.S. authorities alleged that over $4.5 billion was stolen from the fund in a fraud orchestrated by a financier known to be close to Najib and his family.

U.S. Attorney-General Jeff Sessions called the 1MDB scandal “kleptocracy at its worst” and the fund is the subject of money-laundering investigations in at least six countries, including Switzerland, Singapore and the United States.

Filings by the U.S. Justice Department in a civil lawsuit indicated nearly $30 million of the money stolen was used to buy jewellery for Rosmah, including a rare 22-carat pink diamond set in a necklace.

By Rozanna Latiff and Tom Westbrook