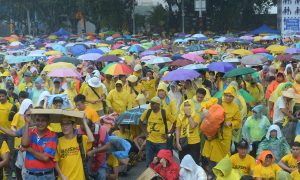 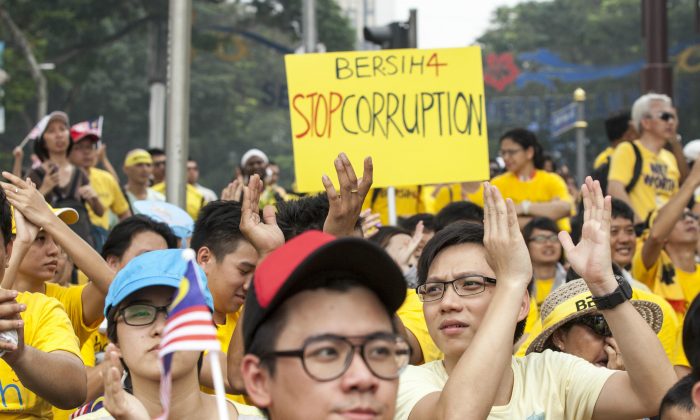 Protestors listen to speeches during the Bersih 4.0 rally in Kuala Lumpur, Malaysia, on Aug. 30, 2015. Prime Minister Najib Razak has become embroiled in a scandal involving state fund debts and allegations of deposits totaling 2.6 billion ringgit paid to his bank account. Razak has denied any wrongdoing. Thousands of people gathered to demand his resignation and a new general election. (Charles Pertwee/Getty Images)
Asia & Pacific

Late last month, Malaysians at home and abroad participated in extended public demonstrations. Protesters were calling for government and economic reform, clean elections, the right to public protest, and the resignation of Prime Minister Najib Razak.

While huge crowds turned out worldwide, most media outlets outside Malaysia did not cover the rallies.

Organizers estimate that 500,000 people joined Bersih 4 protests in Malaysia. The local turnout alone is incredible given that freedom of assembly there is not a protected right. An additional 10,000 people attended solidarity rallies in more than 70 cities worldwide, including 11 major cities in the United States. “Bersih,” the rallying cry of these demonstrations, means “clean” in Malay.

From ‘Tiger’ to Scandal

Concerns over civil liberties, political transparency, and economic stability are often linked in Malaysia. The country was formerly one of Asia’s “tiger economies.” In the early 2000s, it was the United States’ 10th largest trading partner. As of 2013, it ranks 20th in this category. In addition, Malaysia is a key player in the Trans-Pacific Partnership.

The economic ties between Malaysia and the United States have weathered a history of political scandals. The controversial imprisonment of former Deputy Prime Minister Anwar Ibrahim has drawn international critique for years. The government also continues to enforce severe restrictions on freedom of speech.

Related political and economic developments have long frustrated Malaysians at home and abroad. The Bersih 4 demonstrations were spurred by the allegation that approximately $700 million was transferred into Najib’s personal account from the 1Malaysia Development Berhad fund. Najib’s decision to replace cabinet members and the attorney general investigating the scandal shattered what remaining confidence Malaysians had in his government.

The massive turnout for Bersih 4 represents a significant increase in local and international participation in the Bersih movement. The first demonstrations focused primarily on electoral reform. The movement has since grown to encompass a wide range of concerns.

Bersih 1.0 in 2007 and Bersih 2.0 in 2011 drew thousands of protesters in Kuala Lumpur. Participants at these rallies faced a police force armed with tear gas and water cannons.

Bersih 2.0 also saw the “awakening of the Malaysian diaspora.” This time, 4,000 participants attended solidarity rallies in over 30 cities. The momentum continued with Bersih 3.0. The 2012 demonstrations drew a crowd of 15,000 in Kuala Lumpur and sparked rallies in over 80 cities worldwide.

As a Malaysian living abroad for the last 20 years, I have been following these rallies closely. My research focuses on Malaysian literature, culture, and politics, so my investment in Malaysia is both personal and professional. Like me, thousands of Malaysians around the world are tuned to developments back home.

Inspired by connections and current events, members of the Malaysian diaspora gathered in a diverse range of cities for the fourth iteration of Bersih protests.

In the United States, Bersih 4 rallies were organized in cities including Atlanta, Chicago, Houston, Los Angeles, New York, San Diego, and Washington, D.C. Some of the demonstrations attracted hundreds of protesters.

These global rallies were fueled by the approximately two million Malaysians who have emigrated since the country gained independence from Britain in 1957. Despite these large numbers, Malaysians living abroad are not often included in popular definitions of “immigrant” or “Asian.” This is especially true in the United States, where Malaysians make up only a small fraction of the growing Asian-American population.

These demographics obscure what the Bersih 4 rallies make plain. The Malaysian diaspora is a vibrant and dynamic international community. Its members have put down roots around the world while also remaining invested in the future of Malaysia’s political and civic life.

Despite racial and religious tensions at home, the Malaysian diaspora is demonstrating that Malaysian identity is increasingly transnational. Malaysians who continue to move abroad create avenues for Malaysian civic participation in cities around the world. At the same time, their skills and experiences also contribute to the enrichment of these international communities.

As the Malaysian diaspora grows and expands, we might expect this diverse community to continue “cultivating international solidarity” around critical issues unfolding in Malaysia. This approach to citizenship and nationalism reaches continually outwards. It crosses international borders, as well as city and county lines in countries that are now home to Malaysians overseas.

Invoking their right to free speech and public assembly around the world, Malaysians are using their position as global citizens to draw international attention to conditions in Malaysia. They are also choosing to stand in solidarity with Malaysians at home.

Despite this global support, Bersih organizers are now facing charges in Malaysia. The Malaysian Foreign Ministry recently declared that members of the Malaysian diaspora who participated in these global rallies could also become targets of government investigation.

The risks and rewards of this kind of civic engagement require a more complex understanding of what it means to be “Asian” or “immigrant” in an international context. It is especially necessary given the anti-immigrant sentiments flourishing across the United States and Europe.

Sharing diverse homes and diverse affiliations, the Malaysian diaspora illuminates the possibility of civic participation that challenges international borders and moves beyond the limits of the ballot box.

Sheela Jane Menon is an assistant instructor at the University of Texas’ department of English and the Center for Asian American Studies. This article was previously published on TheConversation.com