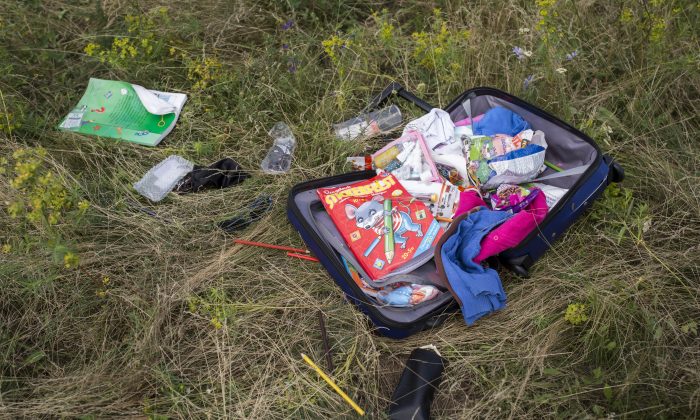 Luggage and personal belongings from Malaysia Airlines flight MH 17 lie in a field on July 20, 2014 in Grabovo, Ukraine. Malaysia Airlines flight MH17 was travelling from Amsterdam to Kuala Lumpur when it crashed killing all 298 on board including 80 children. The aircraft was allegedly shot down by a missile and investigations continue over the perpetrators of the attack. (Photo by Rob Stothard/Getty Images)
Europe

The belongings of MH17 crash victims have allegedly being stolen.

Malaysia Airlines Flight MH17 was shot down over Ukraine by a surface-to-air missile on Thursday, July 17.

The 298 crew and passengers on board the plane, which was traveling from Amsterdam to Kuala Lumpur, all perished in the crash.

Anton Gerashchenko, an adviser to the Ukrainian Ministry of Internal Affairs, was first to report on via a Facebook post on Friday that certain “terrorists – death-hunters were collecting not only cash money and jewelry of the crashed Boeing passengers but also the credit cards of the victims.”

Following that, Alexander Borodai, the prime minister of the self-proclaimed Donetsk People’s Republic, suggested the next day that local residents could have picked up the victims’ credit cards and used them.

However, a witness at the crash site pointed out to Daily Mail reporter Ian Birrell that rescuers have been stealing the victims’ valuables.

‘It is simply disgusting,” the witness said.

“[The rescuers] are just picking over the remains like the worst kind of common thieves.”

“I saw them steal cameras from a bag, then pick up a pair of binoculars only to throw them away because they’d broken in the crash.”

Birrell followed the witness to the site of the theft, and discovered a “broken pair of Tasco binoculars” lying on the ground.

After news of alleged theft broke, the Dutch Banking Association released a statement on Saturday telling banks to take “preventive measures,” and compensate the victims’ next of kin “any damages resulting from abuse” of cards.

On Sunday, Ukraine president Petro Poroshenko condemned the alleged theft in a tweet, and also wrote that the manner in which the “terrorists” dealt with the victims’ bodies “transcends human morality.”

Thus far, the reports of theft have not been confirmed.