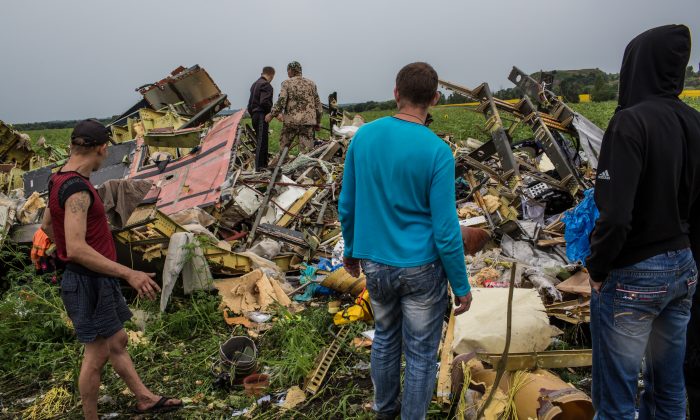 There have been some conflicting reports about the flight recorders of the crashed MH17 flight.

The Malaysia Airlines Boing 777 flight, which was traveling from Amsterdam to Kuala Lumpur, was shot down in Ukraine on Thursday, July 17 by a surface-to-air missile.

298 people were on board the plane, and all 283 passengers and 15 crew members died in the crash.

The plane parts were scattered in the region of Grabovo and Rassypnaya in Ukraine.

Since the rescue operations started, there have been conflicting reports about what happened to the plane’s black boxes.

Early on, Russian radio station Kommersant FM reported that one of the plane’s black boxes were recovered by pro-Russian separatists and were en route to Moscow “”for investigation.”

Russian news agency Interfax also quotes the Donetsk Rupublic First Deputy Prime Minister Andriy Purgin as saying that the Republic would “most likely will give [the black boxes] to the Interstate Aviation Committee (IAC), to Moscow.

“They are highly qualified experts who will be able to accurately determine the cause of the disaster, even though it is so clear,” Purgin was supposed to have said.

Also, an aide of Donetsk separatist leader Aleksandr Borodai claimed that they had recovered eight out of twelve recording devices.

It is uncertain what the twelve recording devices are. Planes usually have two black boxes, one for recording flight data and the other for recording cockpit voices.

However, Borodai told the Associated Press that, “No black boxes have been found … we hope that experts will track them down and create a picture of what has happened.”

Malaysia Transport Minister Datuk Seri Liow Tiong Lai had also said that there is no official confirmation that the black boxes are in Moscow’s hands.

“I have heard about it, but it has yet to be verified. All this will be verified, as we have not received any official notes from the Ukraine authorities,” said Liow.

On Friday, Kostyantyn Batovsky, governor of eastern Ukraine’s Donetsk region, also told Interfax-Ukraine that “Two black boxes were found by our emergency services. I have no information on where these boxes are at the moment.”

There is no official confirmation that either of the black boxes have really been found, and in whose hands they are in if they have been recovered.