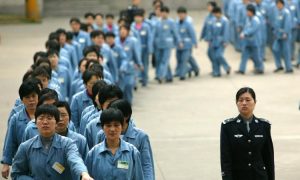 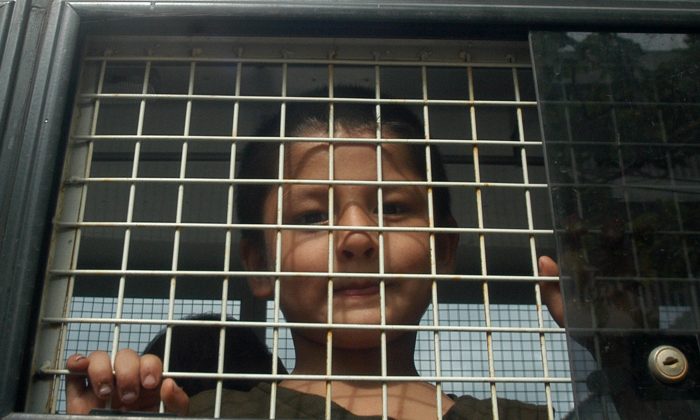 An ethnic Uighur Muslim boy stands inside a police van in Thailand's southern Songkhla Province on March 15, 2014. Thailand officials said they suspected a group of 200 people recently rescued from a human trafficking camp were ethnic Uighur Muslims, as calls mounted from the international community to protect the group and ensure they are not forced back to China. (AP Photo/Sumeth Panpetch)
International

WASHINGTON—The State Department has taken Malaysia and Cuba off its blacklist of countries failing to combat modern-day slavery, leaving the U.S. open to criticism that politics is swaying the often-contentious rankings in its annual human trafficking report.

Thailand, downgraded with Malaysia last year because of pervasive labor abuses in its lucrative fishing industry, remained on the blacklist. That will add to the growing strains in its once-strong relations with Washington. Critics contend that Malaysia’s upgrade is related to its participation in a U.S.-backed trade agreement among Pacific Rim countries. Thailand is not part of the proposed agreement.

The department released Monday the annual U.S. assessment of how 188 governments around the world have performed in fighting the flesh trade and other forms of exploitative labor.

Cuba has for several years been stuck on the lowest ranking, “tier 3,” amid allegations, denied by Havana, of coerced labor with Cuban government work missions abroad. Its upgrade comes a week after the U.S. and Cuba formally restored diplomatic relations after a half-century of estrangement. The U.S. also removed Cuba from its list of state sponsors of terrorism in late May.

The Trafficking in Persons Report is one of several annual assessments issued by the department on human rights-related topics, but it’s unusual in that it ranks nations, which can ruffle diplomatic feathers.

It is based on the actions governments take, rather than on the scale of the problem in their countries. Globally, more than 20 million people are believed to be affected in industries such as mining, construction, the sex trade, and domestic service.

President Barack Obama now has 90 days to determine whether to apply sanctions against tier 3 governments. The president can block various types of aid and could withdraw U.S. support for loans from the World Bank and International Monetary Fund.

But the U.S. often chooses not to, based on its national security interests, as it did last year for both Thailand and Malaysia, which Washington views as important partners in its strategic outreach to Asia.

Among the 23 nations still stuck at tier 3 are Iran, Libya, North Korea, Russia, Syria and Zimbabwe.

Uzbekistan was promoted after two years on the blacklist. The department cited a government prohibition on forced labor of children in the 2014 cotton harvest, although it said government-compelled use of adults in the harvest remained “endemic.”

Other nations upgraded from tier 3 were the Democratic Republic of Congo, Papua New Guinea and Saudi Arabia. Those downgraded to tier 3 were Belarus, Belize, Burundi, Comoros, the Marshall Islands and South Sudan.

Malaysia’s upgrade is likely to raise the most hackles in Congress and among human rights activists. Earlier this month, 19 U.S. senators wrote to Secretary of State John Kerry urging that Malaysia stay on the blacklist.

One hundred and sixty House members also registered concern, arguing that an upgrade would not be merited and would appear driven by “external considerations.”

Malaysia is one of 12 nations in the Trans-Pacific Partnership, the key economic plank of Obama’s Asia policy. The nations’ trade ministers are meeting in Hawaii this week, hoping to close on the agreement after years of negotiations.

Malaysia’s ranking is contentious as an anti-trafficking amendment to legislation crucial for the deal’s eventual ratification by Congress limits the president’s ability to secure free trade agreements with countries assigned to tier 3.

“By upgrading Malaysia, the U.S. is selling out victims of human trafficking,” said Melysa Sperber, director of the Alliance to End Slavery and Trafficking. “It also undermines the integrity of the report and jeopardizes the credibility that has been built up over many years.”

The department said Malaysia has proposed legislative changes to strengthen its anti-trafficking law, and has more than doubled the number of trafficking investigations and substantially increased prosecutions in the period covered by the report, but the number of convictions had decreased compared with 2013.

Like Thailand, Malaysia has faced intense international criticism over trafficking of stateless Rohingya Muslims from Myanmar and Bangladesh aboard overcrowded boats. Dozens of graves as well as pens likely used as cages for migrants have been found in abandoned jungle camps on both sides of the Thai-Malaysian border.

Thailand contends it has taken action to combat trafficking to merit an upgrade from tier 3. Days ahead of the release of U.S. rankings — after the reporting period for the 2015 rankings — state prosecutors recommended charges against more than 100 people, including a Thai army general, implicated in trafficking of migrants.

But Thailand remains under the spotlight over slavery in Southeast Asia’s fishing industry. A year-long Associated Press investigation has led to more than 800 people being rescued or repatriated in recent months. In April, the EU gave Thailand six months to drastically combat illegal and unregulated fishing or face a seafood import ban.