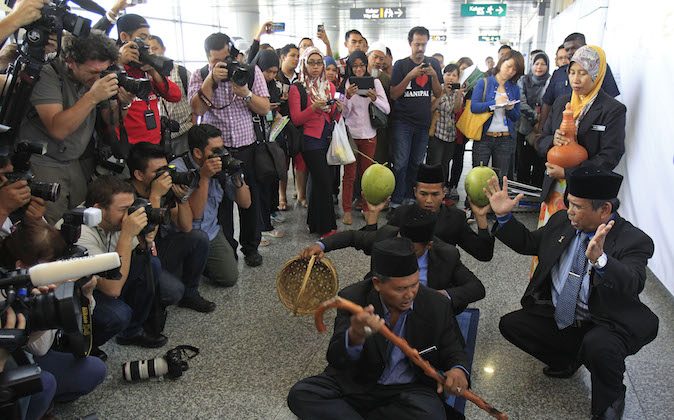 Malaysian well-known shaman Ibrahim Mat Zin, front right, uses spiritual methods and prayers to locate the missing Malaysia Airlines plane MH370 at Kuala Lumpur International Airport in Sepang, Malaysia, Wednesday, March 12, 2014. The missing Malaysian jetliner may have attempted to turn back before it vanished from radar, but there is no evidence it reached the Strait of Malacca, Malaysia's air force chief said Wednesday, denying reported remarks he said otherwise. The statement suggested continued confusion over where the Boeing 777 might have ended up, more than four days after it disappeared en route to Beijing from Kuala Lumpur with 239 people on board. (AP Photo/Lai Seng Sin)
Asia & Pacific

A Malay shaman (bomoh) showed up at Kuala Lumpur International Airport (KLIA) on Wednesday, Mar. 12, to assist the search and rescue parties by driving away “bad spirits.”

According to The Malaysia Insider, Ibrahim told reporters witnessing the ritual that, “The purpose of the rituals is to weaken the bad spirits so that the rescuers can find the plane if it indeed had crashed.”

The shaman claimed that his rituals were “time tested,” having being handed down by his ancestors.

Raja Bomoh has 50 years of experience, and became well-known after he offered his services to search for victims in major tragedies.

On Monday, Ibrahim conducted a ritual to predict the fate of the plane.

After he felt pain in his eyes and his vision faded to black, Ibrahim concluded that, “the plane was still in the air, or has crashed into the sea.”