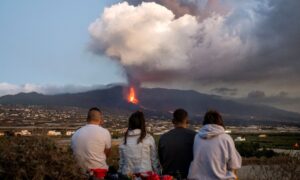 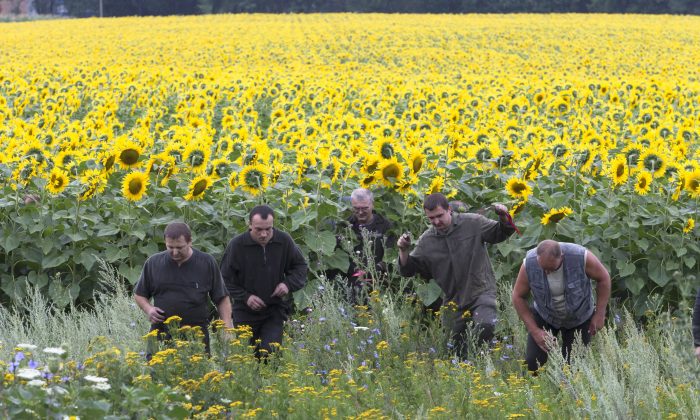 Ukrainian coal miners search the site of a crashed Malaysia Airlines passenger plane near the village of Rozsypne, Ukraine, eastern Ukraine, Friday, July 18, 2014. Rescue workers, policemen and off-duty coal miners were combing a sprawling area in eastern Ukraine near the Russian border where the Malaysian plane ended up in burning pieces Thursday, killing all 298 aboard. (AP Photo/Dmitry Lovetsky)
Europe

The cargo list of the downed Malaysia Airlines MH17 is out.

The plane was shot down by a surface-to-air missile over Ukraine on July 17 while traveling to Kuala Lumpur from Amsterdam.

There were 298 people on board, and none survived the plane crash.

Pro-Russian separatists from the Donetsk Republic have been blamed for the attack on MH17.

Malaysia Airlines has since released the plane’s cargo list.

There was a “shipment of pot” on the cargo list, but it probably refers to pottery, and not cannabis, because it is illegal to traffic drugs into Malaysia.

See an AP report on the rescue effort.

ROZSYPNE, Ukraine (AP) — Emergency workers, police officers and even off-duty coal miners spread out Friday across the sunflower fields and villages of eastern Ukraine, searching the wreckage of a Malaysia Airlines jet shot down as it flew miles above the country’s battlefield.

The attack Thursday afternoon killed 298 people from nearly a dozen nations — including vacationers, students and a large contingent of scientists heading to an AIDS conference in Australia. At least 189 of the dead were from the Netherlands.

U.S. intelligence authorities said a surface-to-air missile brought down Malaysia Airlines Flight 17 as it flew from Amsterdam to Kuala Lumpur, but they did not speculate on who fired it. The Ukrainian government in Kiev, the separatist pro-Russia rebels they are fighting and the Russia government that Ukraine accuses of supporting the rebels all denied shooting the plane down. Moscow also denies backing the rebels.

After holding an emergency session, the U.N. Security Council called for “a full, thorough and independent international investigation” into the downing of the plane.

Russian President Vladimir Putin called Friday for a cease-fire in eastern Ukraine and urged the two sides to hold peace talks as soon as possible. A day earlier, Putin had blamed Ukraine for the crash, saying Kiev was responsible for the unrest in its Russian-speaking eastern regions. But he did not accuse Ukraine of shooting the plane down and did not address the key question of whether Russia gave the rebels such a powerful missile.

The Ukrainian Interior Ministry released a video purporting to show a truck carrying the Buk missile launcher it said was used to fire on the plane with one of its four missiles apparently missing. The ministry said the footage was filmed by a police surveillance squad at dawn Friday as the truck was heading to the city of Krasnodon toward the Russian border.

There was no way to independently verify the video.

Access to the sprawling crash site remained difficult and dangerous. The road into it from Donetsk, the largest city in the region, was marked by five rebel checkpoints Friday, with document checks at each.

By midday, 181 bodies had been located, according to local emergency workers in contact with officials in Kiev. In addition to the Dutch, passengers on the plane included 29 Malaysians, 28 Australians, 12 Indonesians, nine Britons, four Germans, four Belgians, three Filipinos and one person each from Canada, New Zealand and Hong Kong, according to the airlines and those governments.

Still Nataliya Bystro, a spokeswoman for Ukraine’s emergency services, said rebel militiamen were interfering with the recovery operation. She did not elaborate.

Separatist rebels who control the crash site issued conflicting reports Friday about whether they had found the plane’s black boxes or not.

“No black boxes have been found … we hope that experts will track them down and create a picture of what has happened,” said Donetsk separatist leader Aleksandr Borodai.

Yet earlier Friday, an aide to the military leader of Borodai’s group said authorities had recovered eight out of 12 recording devices. Since planes usually have two black boxes — one for recording flight data and the other for recording cockpit voices — it was not clear what he was referring to.

Borodai said 17 representatives from the Organization for Security and Cooperation and four Ukrainian experts had traveled into rebel-controlled areas to begin an investigation into the attack.

The crash site was spread out over fields between two villages in eastern Ukraine — Rozsypne and Hrabove. In the distance, the thud of Grad missile launchers being fired could be heard Friday morning.

In the sunflower fields around Rozsypne, 40 kilometers (25 miles) from the Russian border, lines of men disappeared into thick, tall growth that reached over their heads. One fainted after finding a body. Another body was covered in a coat.

About 70 off-duty coal miners joined the search, their faces still sooty from work.

In Hrabove, several miles away, large numbers of sticks, some made from tree branches, were affixed with red or white rags to mark spots where body parts were found.

Ukraine Foreign Ministry representative Andriy Sybiga said the bodies will be taken to Kharkiv, a government-controlled city 270 kilometers (170 miles) to the north, for identification.

Among the debris were smashed watches and mobile phones, charred boarding passes and passports. An “I (heart) Amsterdam” T-shirt and a guidebook to Bali hinted at holiday plans gone awry.

Large chunks of the Boeing 777 that bore the airline’s red, white and blue markings lay strewn over one field.  The cockpit and one turbine lay a kilometer (a half-mile) apart, and the tail landed 10 kilometers (six miles) away. One rebel militiaman in Rozsypne told The Associated Press the plane’s fuselage showed signs of being struck by a projectile.

The area has seen heavy fighting between government troops and pro-Russia separatists, and rebels had bragged about shooting down two Ukrainian military jets Wednesday in the region.

Anton Gerashenko, an adviser to Ukraine’s interior minister, said the plane was flying at about 10,000 meters (33,000 feet) when it was hit by a missile from a Buk launcher, which can fire up to an altitude of 22,000 meters (72,000 feet). Malaysia’s prime minister said there was no distress call before the plane went down.

“The initial response of the Russian ambassador was to blame Ukraine for this and I have to say that is deeply, deeply unsatisfactory,” he said. “It’s very important that we don’t allow Russia to prevent an absolutely comprehensive investigation so that we can find out exactly what happened here.”

“This is not an accident, it’s a crime,” he added.

For his part, Russian Foreign Minister Sergey Lavrov dismissed Kiev’s accusations that Moscow could be behind the attack.

“Regarding those claims from Kiev that we allegedly did it ourselves: I have not heard a truthful statement from Kiev for months,” he told the Rossiya 24 television channel.

He also said Russia has no intention of getting its hands on the plane’s black boxes and added they should be given to international aviation organizations.

Ukrainian Prime Minister Arseniy Yatsenyuk described the attack as an “international crime” whose perpetrators should be punished in an international tribunal.

“Yesterday’s terrible tragedy will change our lives. The Russians have done it now,” he was cited as saying by the Interfax-Ukraine news agency.

Malaysian Transport Minister Liow Tiong Lay insisted again Friday that the airline’s path was an internationally approved route and denied accusations that Malaysia Airlines was trying to save fuel and money by taking a more direct flight path across Ukraine.

“I want to stress that this route is an approved path that is used by many airlines including 15 Asia-Pacific airlines. We have not been informed that the path cannot be used,” he said.

Aviation authorities in several countries, including the FAA in the United States, had issued previous warnings not to fly over parts of Ukraine after Russia annexed the Crimean Peninsula in March. Within hours of the crash Thursday, several airlines announced they were avoiding parts of Ukrainian airspace.

Passengers on the plane included a large contingent of world-renowned AIDS researchers and activists headed to an international AIDS conference in Melbourne, Australia. News of their deaths sparked an outpouring of grief across the global scientific community.

In the Netherlands, flags were flying at half-staff as residents mourned the victims.

At the Tour de France cycling race, riders observed a minute of silence for the victims before the start of the day’s stage in Saint-Etienne. The Dutch team Belkin wore black armbands.

Kaylene Mann’s brother Rod Burrows and sister-in-law Mary Burrows were on Malaysia Airlines Flight 370 when it vanished in March over the Indian Ocean. On Friday, Mann found out that her stepdaughter, Maree Rizk, was killed on Flight 17.