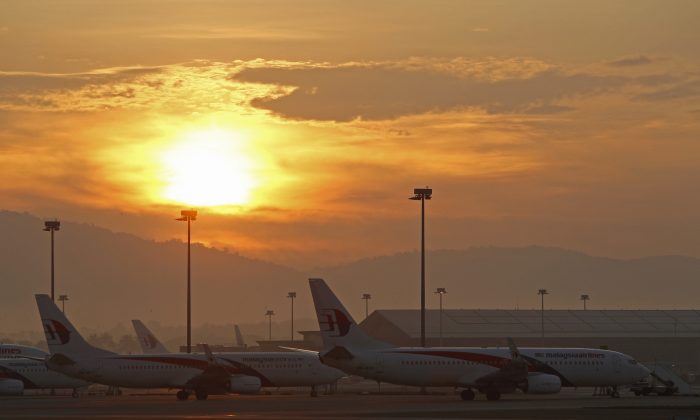 FILE - in this Sunday, Aug. 24, 2014 file photo, Malaysia Airlines planes taxi on the tarmac at Kuala Lumpur International Airport in Sepang, Malaysia. Malaysia Airlines has renamed a promotional competition asking people what activities and destinations are on their "bucket list" after acknowledging it was inappropriate given the two deadly disasters it has suffered this year. (AP Photo/Lai Seng Sin, File)
Asia & Pacific

The search for Malaysia Airlines Flight 370 will start up again in the Southern Indian Ocean, with investigators using new, three-dimensional maps to aid in the hunt for the missing plane.

The National Post reported that searchers will look into a 350-mile-long area called the seventh arc, which is where officials believe the missing jetliner crashed.

Maps of the seventh arc have revealed an area with volcanoes and ridges deeper than the Grand Canyon, reported the Post. The location is about 3 miles beneath the surface of the Indian Ocean.

Some of the underwater mountains are more than a mile high and there’s also a volcano larger than Mount St. Helens. The maps cover a region called the Broken Ridge, located about 1,100 miles from Australian city of Perth.

“The terrain of the area around Broken Ridge makes the European Alps look like foothills,” said Dr. Simon Boxall, a professor of ocean science at the University of Southampton. “If you stood in the valley you would have, towering above you, mountains that were about 3 kmhigh – just coming straight up in front of you.”

The Australian Transport Safety Bureau, the agency leading the search, produced the maps. It said that “MH370 will be found in close proximity to the arc,” adding that “it’s unlikely to be more than 20 NM to the west or 30 NM to the east of the arc.”

“While it is impossible to determine with certainty where the aircraft may have entered the water, all the available data and analysis indicates a highly probable search area close to a long but narrow arc of the southern Indian Ocean,” the agency said, reported USA Today.

Peter Foley, who is the Australian official coordinating the hunt for the plane, said that he is cautiously optimistic” the jet will be found.

“Given the area that we are going to need to potentially search, it’s an extraordinary challenge,” he said.

The plane disappeared March 8 and had 239 people on board. It was traveling from Kuala Lumpur to Beijing.