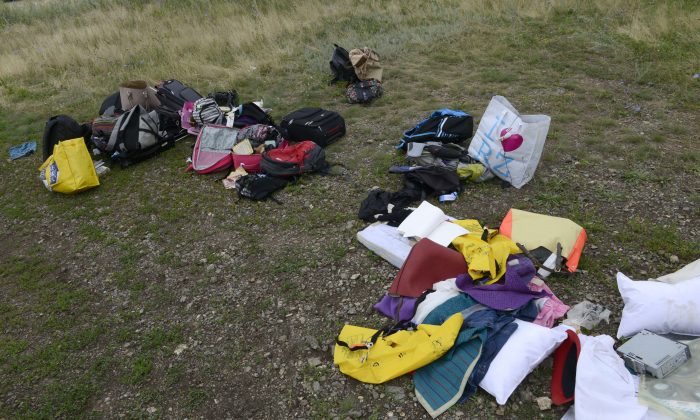 Passengers' belongings lie at the site of the crash of a Malaysia Airlines plane carrying 298 people from Amsterdam to Kuala Lumpur in Grabove, in rebel-held east Ukraine, on July 19, 2014. Ukraine and pro-Russian insurgents agreed on July 19 to set up a security zone around the crash site of a Malaysian jet whose downing in the rebel-held east has drawn global condemnation of the Kremlin. Outraged world leaders have demanded Russia's immediate cooperation in a prompt and independent probe into the shooting down on July 17 of flight MH17 with 298 people on board. (Alexander KHUDOTEPLY/AFP/Getty Images)
Europe

Pictures of the MH17 victims’ belongings have surfaced.

Malaysia Airlines Flight MH17 was flying over Ukraine from Amsterdam when it was shot down by a surface-to-air missile.

All 298 passengers and crew perished in the flight, which was headed for Kuala Lumpur.

Some of pictures of the passenger belongings that have survived the crash have surfaced.

[View the story “Passenger belongings that survived the crash” on Storify]

See an AP story of the MH17 victims.

THE HAGUE, Netherlands (AP) — The human cost of the downing of Malaysia Airlines Flight 17 hit home around the world Friday, upending scores of families and small communities spanning half of the planet, from a Dutch fishing village to an Australian soccer club and a Dubai cake store.

Relatives and colleagues paid emotional tribute to the dead. Students gathered to pray for lost friends, and even Tour de France cyclists paused for a moment’s silence in memory of the 298 people killed in Ukraine.

The victims came from 13 countries and all walks of life. They included an acclaimed AIDS researcher from Amsterdam, a nun and teacher from Sydney, a Dutch senator and a World Health Organization spokesman.

Because the plane took off from Amsterdam, most were Dutch headed for Kuala Lumpur. But others were from elsewhere in Europe, Asia, Australia and New Zealand. One was a dual U.S.-Dutch citizen, Malaysia Airlines said.

They left behind relatives searching for answers and clinging to memories.

“It’s a black day,” said Ron Peter Pabellon, a Filipino cake maker in Dubai who fears he lost an aunt, uncle and two cousins, one of them his best friend. “I want to see (them) with my own eyes because I don’t want to accept. I don’t want to believe.”

The crash heaped tragedy upon tragedy for one Australian family that also had relatives aboard the Malaysian Airlines plane that vanished in March.

Kaylene Mann’s brother Rod Burrows and sister-in-law Mary Burrows were on Flight 370, which is believed to have crashed into the southern Indian Ocean but has never been found. On Friday, Mann learned that her stepdaughter, Maree Rizk, was killed on Flight 17.

Several passengers on Flight 17 were traveling to Melbourne, Australia, for a major international AIDS conference.

The United Nations organization UNAIDS said the crash claimed “some of the finest academics, health care workers and activists” working on the disease.

The Academic Medical Center hospital in Amsterdam said two of its staff members, including renowned AIDS researcher Joep Lange, a former president of the International AIDS Society, and his colleague Jacqueline van Tongeren were believed to have perished.

Karlijn Keijzer, a 25-year-old Dutch graduate student at Indiana University, was mourned by rowing communities on both sides of the Atlantic.

The Amsterdam student rowing club Skoll said on its website that Keijzer died with another rower from the club, Laurens van der Graaff, on their way to a vacation together.

In the close-knit fishing village of Volendam, near the Dutch capital, flowers were laid outside a florist’s shop. The shop’s owner and her boyfriend were among the victims.

The dead included a Dutch senator, Willem Witteveen of the Labor Party, the Senate announced.

Students at the Kincoppal-Rose Bay School of the Sacred Heart in Sydney gathered Friday for a special prayer meeting to remember Sister Philomene Tiernan, a 77-year-old teacher who was killed.

“For me, she’s been a great mentor, and she’s also a personal friend,” Principal Hilary Johnston-Croke said, her voice breaking.

A high school in the central Dutch town of Woerden that lost three pupils from three different families threw open its doors for friends, relatives and teachers to console one another, Principal Alice Timmermans said.

Another Australian school, Toorak College in Melbourne, was also affected. Teacher Frankie Davison and her husband, Liam, were on the stricken flight.

Australian sports clubs were hit by the tragedy, too.

Victoria state real estate agent Albert Rizk and his wife, Maree Rizk, were both killed, leaving a hole in a local football club where they volunteered and their son, James, played.

Phil Lithgow said Albert Rizk was a member of the club’s committee. Maree was a volunteer in the canteen.

“They were very lovely people. You wouldn’t hear a bad word about them — very generous with their time in the community, very community-minded,” Sunbury Football Club president Phil Lithgow said.

English Premier League soccer club Newcastle United said two of its fans who were flying to watch the team’s tour of New Zealand were among the dead. The club’s website named the supporters as John Alder and Liam Sweeney.

In Geneva, the World Health Organization said spokesman Glenn Thomas, a 49-year-old Briton, was killed on his way to the AIDS conference.

Thomas “will be remembered for his ready laugh and his passion for public health,” said Gregory Hartl, another spokesman for the U.N. health agency.

Dutch cyclists competing in the Tour de France wore black armbands in a show of solidarity with relatives.